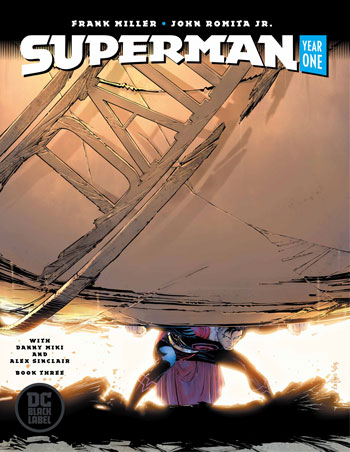 The previous outings of Frank Miller’s take on the Man of Steel were less than stellar. Unfortunately, Miller’s grand finale not only falls in the same league, but it’s also the worst one of the bunch.

Yes, Superman meets Lois Lane, Batman, and Wonder Woman for the first time. Those moments under Miller’s creative stewardship should have been legendary.

Sadly, they’re underwhelming and felt almost inauthentic, which is really weird considered who wrote this book.

There was absolutely no payoff to seeing Superman rescue Lois Lane for the first time. There was a tiny bit of will they, won’t they, but that was it. Later, Lois reported a Superman story on the scene, but she would have done that anyway. It didn’t have to be a romantic deal, especially since we know where Superman ends up in the relationship department. It just had to be different. However, there was nothing.

Batman v. Superman: Dawn of Justice is a masterpiece compared to how the DC trinity met here for the first time.

Batman comes off as a cocky frat boy who thinks he’s going to punch Superman into submission and is uncharacteristically unprepared. Wonder Woman broke up the “fight” and essentially formed the Justice League with two sentences. Why would anyone stop what they’re doing and ultimately listen to someone they just met?

A slight twist involving a popular Superman villain came out of nowhere and without rhyme or reason. The individual behind the mysterious and confusing narration is revealed and ultimately disappointing because it implies a sequel is in the works, which, no, just, no.

When it comes to the book’s illustrative features, John Romita Jr. and Danny Miki provide energy with each turn of the page. The character work is well-rendered, and the color pallet fills out the panels quite nicely. The artwork is excellent but not enough to balance out a lackluster narrative.

In some respects, it appeared as if Frank Miller wanted to write an Aquaman story instead of Superman.

In other aspects, Year One felt like a first draft that banked on the reputation of his previous work to anchor this series. Not only were the ideas presented uninspired, but the execution is also at best, haphazard. The art department, on the other hand, came to work. It’s hard to believe someone read this at the publishing level and genuinely believed this story would knock our socks off.

This issue and the series as a whole is a hollow cash grab banking on the name of its famed author.