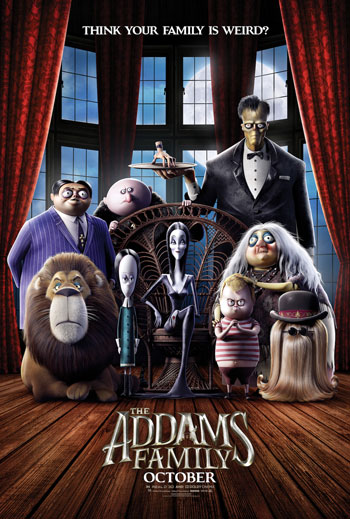 Everyone’s favorite peculiarly ghoulish nuclear family is back in theaters after decades away.

The Addams Family brings an animated version to the big screen for the first time, and more closely skews to the original gag cartoons rather than drawing from the wildly popular live action movies of the early 90s.

While those films felt fresh and innovative, this latest incarnation seems more like a television special getting a limited theater run. It isn’t without laughs, but they are never big enough to deserve the screen they are shown on.

Gomez (Oscar Isaac) and Morticia (Charlize Theron) are on the hunt for a weird but welcoming home sweet home to call their own, free from the judgement of others. As they lay down roots in New Jersey and invite the whole extended family for a special celebration, their creepy kooky vibe threatens the plans of TV interior decorator Margaux Needler (Allison Janney), who is trying to sell her Stepford-perfect dream community just down the road.

The story is a modernized version of the classic Frankenstein intolerance story. You will not have to do any heavy lifting to see where it is going early on, but the target under 13 audience will have a few jokes go over their heads.

When Wednesday brings a red balloon into the house, Morticia notes that usually “these things have a murderous clown on the other end”. The neighbors with pitchforks are brought together by a Nextdoor-style app that allows rumors and accusations about the unfamiliar newcomers to spread like wildfire in a very close-to-home storyline.

Many other current or pop culture jokes do not land quite so well, but they are shoehorned in to create an inauthentic otherness that the Addams’ simply do by, well, existing. The best moments are those when the outside world clash with the family’s odd but loving behavior, or when the family is left to its own devices.

At least the voice casting is spot on.

Isaac is excitable and manic, with all the earnest energy that Theron is careful to keep out of her icy responses. They have great vocal chemistry to the point that it’s almost a shame that this is animated. Allison Janney is devious and delightful as the HGTV-gone-wrong host Margaux Needler. As the deadpan Wednesday Addams, Chloë Grace Moretz gives the exact performance you’d want to hear as the poster child for disaffected youth. She is the center of the film, but Finn Wolfhard does a surprisingly good job of making sure Pugsley has your heart. He is far more of a main character than a foil to Wednesday, and this is a version of the character you could watch endlessly on Saturday mornings.

While the ending is telegraphed in the first quarter of the film, young moviegoers will still enjoy this easy entry into the Addams franchise. Adults have more of a canon to judge it against, and will probably end up a bit bored given all that we know this family has to offer.

Either way, the whole audience will probably end up humming (and snapping) the theme song on the way out of the theater.