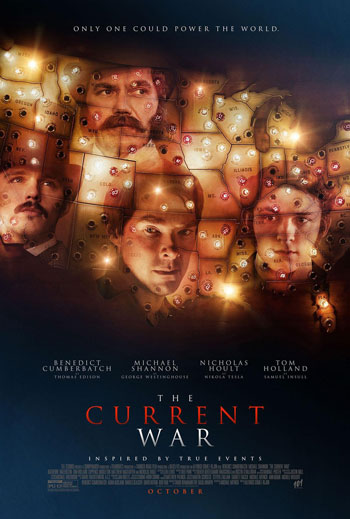 The Current War gives us Thomas Edison Vs. George Westinghouse.  Both prolific inventors whose creations over a hundred years ago still shape our lives, competing to be the first to bring electricity into every person’s home.

Edison, already a household name by using DC (direct current) is challenged for supremacy in the electrical industry by Westinghouse championing the cheaper, more efficient AC (alternating current).  It’s the Mac Vs. PC of its time.

The rivalry escalates for years culminating when both Edison and Westinghouse vie for the contract to illuminate the Chicago World’s Fair, a symbol of technology and the future.

The film seems to have a clear favorite in the lesser known Westinghouse. It makes a point to show that he is a Civil War vet for the North, a businessmen who worries about his workers, and his reason for wanting to best Edison is altruistic.  His motivation is to leave the world a better place.  Michael Shannon plays Westinghouse with subtly. He is the quiet, unassuming man who lets his actions speak louder than his words.

Contrasting Shannon’s Westinghouse is Benedict Cumberbatch’s attention seeking Edison. Cumberbatch takes another turn as genius whose work and need for celebrity consumes him to the detriment of the rest of his life.  While I feel like I’ve seen Cumberbatch play various shades of this character before (see: Sherlock, Imitation Game, Dr. Strange) he does it so well that it is always enjoyable. The same could be said for Tom Holland as Edison’s secretary, Samuel Insull.  It’s kinda like watching Peter Parker in the late 1800’s.  But again, if it ain’t broke…

Although I was disappointed that the film had Nikola Tesla, who was superbly played by Nicholas Holt, as barely a blip on the map, instead of being an integral piece to the outcome of the real life current war.  It makes me wonder if more of his scenes ended up on the cutting room floor for this release

Director Alfonso Gomez-Rejon (American Horror Story) and cinematographer Chung-hoon Chung (Old Boy, It) gives us a stylish film. The film has a kinetic feel that is enhanced not only by the camera framing and movement, but the scenes dissolve into one another.  The use of off-screen violence is almost more unsettling then if the filmmakers had shown us the violent acts.  Instead they leave it to the viewer’s imagination, which is infinitely worse.

It’s the mark of a well made film that even though you know the outcome of a story, you sit transfixed to your seat, waiting to see how we get there.  I know what kind of current is powering the laptop I am using, and it didn’t matter.  I was still waiting to see who lit the beacon in Chicago.