S02E05 — With the team in upheaval, the Titans do everything in their power to save Jason’s life. But when Deathstroke demands they turn over Rose, the dilemma threatens to tear the team apart.

That’s not to say that the heart to heart moments, or quiet conversations, or dialogue over how someone feels about something or someone doesn’t exist; they exist to lengthen the action over the exposition (and the exposition comes in the action more than in the two-hander scenes).

It’s probably safe to say that the dialogue was all character building moments, while the action handled the heavy lifting of the plot. There was something economical about this that I can’t quite point to, but I’m left with complete recall of the episode, even if, at times, I was just listening and not watching (relax, I always watch the episodes twice before doing this). 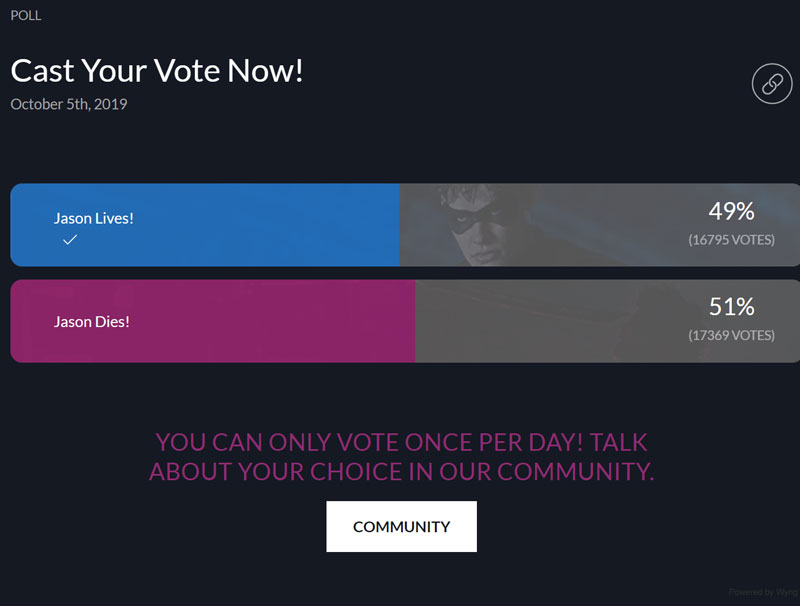 However, get over there and vote (I’d personally prefer he lives as I’ve said more than once, Curran Walters is one of the best parts of the show).

Despite the flashback episode, it’s been 22 minutes since Jason got his ass handed to him by Deathstroke. Transported to a secret location, Jason antagonizes Doctor Light, distracting him and putting him to sleep via a leg scissor. Jason doesn’t get far as Slade is waiting for him, sword in hand.

Kori’s driving from Chicago, Rachel’s dreams are manifesting themselves with some sort of razor sharp ectoplasm (for lack of a better word). Gar reveals what happened to Jason, and of course, Dick isn’t happy.

The thing is, the Titans have no idea that Deathstroke is behind all of this; they assume it’s Doctor Light, so they’re already a step behind and they’re out of their depth in terms of a strategy. The OG Titans aren’t happy at all but mostly they’re angry at Dick.

Light is up Slade’s ass, while Slade is just calm as a cucumber.

It’s unnerving, and Light mentions it too. Light bounces, saying that he’ll take care of the Titans himself. Slade then cuts out Jason’s tracker, and shoots Doctor Light through the head to the tune of Nickelback.

Blame gets thrown around with the new kids. Elsewhere, the adults, having been called by Slade on Light’s cell, begin to debate whether or not they should turn Rose over to her father. It’s a big part of the episode, actually.

Ultimately, Dick decides to turn himself over in exchange for Jason.

Remember, there are all these little intimate moments, between Kori and Rachel, and Kori and Donna, and eventually, between Hank and Dawn, where Hank brings up the sexual abuse he suffered and how he wished someone would rescue him.

He puts that on Jason, sort of, saying that they can’t abandon him. Rose tries to escape, but Hank tries to stop her…and gets his ass handed to him. Then Rachel steps in and literally obliterates Rose.

Everyone is dealing with Rose’s death when, suddenly, she starts twitching and bones start popping back into place and, well look at that, Rose is alive again.

Which is why, ultimately, Dick decides to go alone.

Because it’s in this moment, he realizes (at least to me) that he made the wrong choice. His plan was flawed.

Dick doesn’t have that moment until Slade has a detonator in his hand, about to blow up a suspended scaffold that Jason is tied to.

And then Kori blasts his hand. What follows is one of the best fight scenes in the season (so far), as Deathstroke has no real defense against Kori (at first. Then he brings out the concussive grenades).

Dick uses a discarded bullet proof vest as a shield, then a pipe as a long bo staff against Slade’s sword. It starts at about the 38 minute mark and it is worth watching more than once, believe me. Fantastic job by everyone on the stunt coordination team.

One last bomb, mostly for distraction, and Slade has the detonator in hand again. Button pushed, Dick lunges. But all for naught. Jason falls to his…