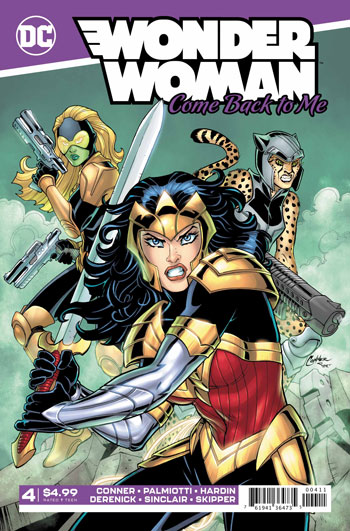 Regardless of the titular character in question or the giant-sized publishing format, Amanda Conner and Jimmy Palmiotti can never be accused of creating a boring story.

Wonder Woman and company were trapped on a mysterious island in the Bermuda Triangle.

Diana’s attempt to rescue Steve Trevor gave her a lot more than she bargained for, including alien bounty hunters and giant monsters. Just when she had a moment to catch her breath, things got even crazier.

Now, Wonder Woman and company are on a spaceship en route to a large space station called “The Arena of Death.” It is quite the jump from island to interstellar combat; however, it worked flawlessly.

Small plot points throughout the book build at a brisk and engaging pace with fun surprises sprinkled in.

When reading comics, we’re so focused on the hero that the villain can get lost in translation. That doesn’t happen with Wonder Woman’s arch-nemesis. Cheetah is a lot of fun here. She needs little reason to kill anyone, and Conner and Palmiotti take full advantage of her murderous blood lust. The aliens controlling the spaceship believe Cheetah and the others are their prisoners.

However, a throat slash here and a quick kill there, and it becomes apparent the aliens are the ones trapped with Cheetah. It balanced out the story since Wonder Woman did her “thou shall not kill” gimmick during an escape attempt.

The artwork of Tom Derenick and Chad Hardin continued to bring an animated series vibe that paid dividends. It matched the tone of the story while making several moments shine. Seeing Aquaman thrown hundreds of miles by a sea creature is contained in one panel.

Another great sight saw Cheetah emerge from the shadows on her unsuspecting foes. The image screamed, “someone is about to die.”

If this issue had to be wrapped up in one word, it would be fun. This miniseries initially published as a giant-sized Walmart exclusive doesn’t carry the seriousness of the current ongoing series penned by G. Willow Wilson. However, it’s not supposed to. Come Back to Me is an easy read that encompasses just enough urgency to make it entertaining.