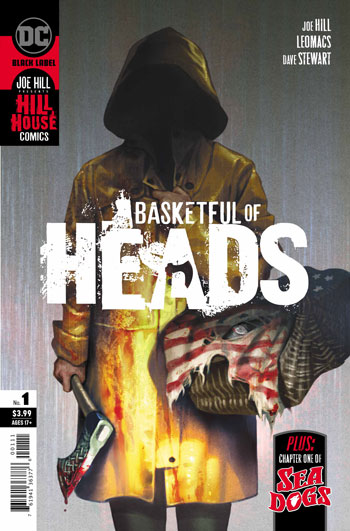 The book opens with a slender figure in a raincoat holding a large basket covered by a bloodstained American flag.

The story shifts to Labor Day weekend in 1983, where we meet the main protagonist, a young woman named June Branch. She’s hanging out on the bridge of a small tourist town of Brody Island, Maine, where the mood gets turned upside down.

We spend some time getting to know June and her boyfriend. They genuinely care for each other and try to balance work, school, and finances.

An empty van with the words “Shawshank Prison” in bold black lettering brings about an instant shift in tone. The trials and tribulations of small-town life turn to horror as news breaks that four convicts have escaped. Hill’s immersive narrative gets the reader well acquainted with the characters and setting. Some of the characters are good people while others, well, not so much, Then, there are those who the jury is still out on. The latter made things interesting due to the horror element at play.

The 8th century Viking axe illustrated on the inside cover of the book loomed over the third act when June sees it for the first time.

Presumably, this weapon is the catalyst for the heads that will be collected in the titular basket. June seemed drawn to it, and that will either be a coincidence or something more because those are the types of breadcrumbs Hill tends to set up throughout his stories. Leomacs’ illustrations have a Sean Phillips vibe to them. The panels and depictions captured the subtle darkness quite nicely. I can’t wait to see his work in future installments where the horror factor is unleashed.

My only quip is that most of this issue sets up what we need to know going forward. It took longer than I would have liked to get going; however, those moments were still engaging.

Overall, Joe Hill’s new imprint is off to a good start.