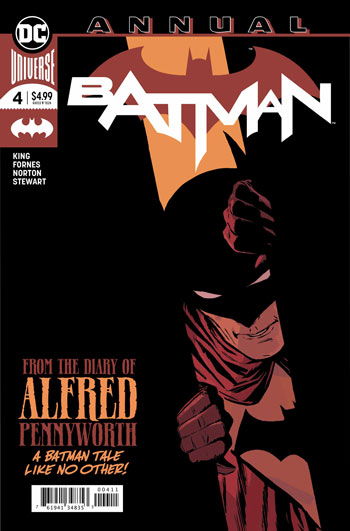 This is a nice annual that has a really great story by writer Tom King.

I was very excited too by one of the artists in this issue.

Why? Well, that is because that story has the amazing artwork of Jorge Fornes. He is my favorite Batman artist of all the people that Tom King has worked with. His work is nothing short of brilliant.

But that doesn’t mean that the few pages drawn by Mike Norton are bad at all! It is just that I love Fornes and his art really seems evoked from David Mazzucchelli.

The opening scene has Batman on a horse chasing someone from a group called “The Cavalry Charge” on another horse.

The scene is exhilarating. It actually is a chase through the rooftops of Gotham.

That is when things get incredibly nuts. Apparently, a wizard like monk has placed a spell on the city! Gotham is under siege! There is even a crazy dragon causing havoc!

Batman slays the dragon in an incredible scene. But then, the whole issue gets even crazier.

We get to see Batman fighting as a boxer in a boxing ring. The fight is completely different than the last scene. Batman fights and knocks out his opponent. And that is when you realize that each of these scenes happen in this issue on one completely separate calendar date each.

Tom King has written a story called “Everyday.” It is a story about how on every day, Batman has a new task in front of him. Whether it is having a fist fight with the Joker or solving some other mystery, each day is a story unto itself.

King has written a very simple story that actually is very complex when you stop and think about it. Each story and picture is much deeper than a normal comic. It is a really nice and well done annual. It also has some of the best art that Batman has ever seen.