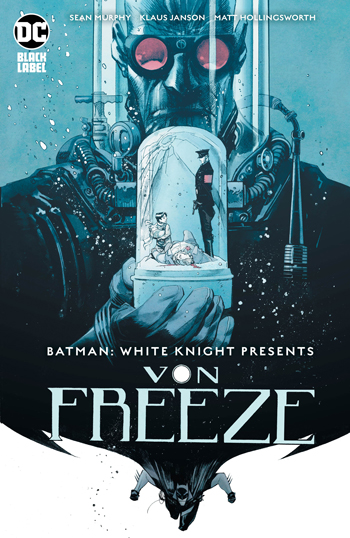 Sean Murphy expands the world of his Batman: White Knight series with an exquisite standalone story that is emotional as it is engrossing.

Batman’s presence is a blip on the radar here, but that is hardly the point as the narrative takes a deep dive into the past of Victor Fries.

The night of Bruce Wayne’s birth serves as the backdrop as the story of Fries’ childhood is a vehicle to distract Thomas Wayne from his wife’s complications while giving birth.

Victor’s upbringing in Nazi Germany didn’t make him a foul man. The same can’t be said for his father, Baron von Fries who’s cytotechnology made him a prime recruit for the Third Reich.

The Baron’s friendship with his research partner, Jacob Smithstein, is the heart of the story. Jacob refuses to be bullied out of his home and is forced to go into hiding with his family. The Diary of Anne Frank echoes in these moments, as the Smithstein’s tread carefully in their surroundings. Unfortunately, someone had to drop the dime, and of course, it was von Fries.

Murphy’s detailed storytelling gut-wrenchingly plants the seeds of deceit. Jacob’s fatherly essence glows on the page, making him easy to like. He affords young Victor with a mentor that the Baron is too busy and apathetic to provide himself. In many ways, the Baron was the opposite of Jacob. He started likable but ended up being someone you rather despised.

Despite his best intentions, von Fries was driven by his selfishness. It seemed natural for him to justify the atrocities he served in the name of his research. Sean Murphy often does his own illustrations, but Klaus Janson, who has penciled some of the most notable Batman books, ensures that Murphy’s artwork will not be missed.

That’s high praise, but that’s what happens when someone with the creative cache of Janson lends his exceptional talents to a comic book. Janson made every inch of page space count with refined visuals, creating a dark and gritty motif.

Von Fries using the freeze gun on S.S. soldiers before putting a bullet in each of their heads was chilling. A room where it was revealed prisoners were being experimented on with cryotechnology was horrifying.

Matt Hollingsworth’s blue hues are the perfect complement to this creative masterpiece. Yes, I called it a masterpiece. Von Freeze is unequivocally one of the best comic books of the year. If there is a better Mr. Freeze story out there, it would be quite the accomplishment to explore.

What Batman: White Knight does so well is it gives readers something to chew on. Murphy’s one-shot story adds even more depth to an already in-depth series.