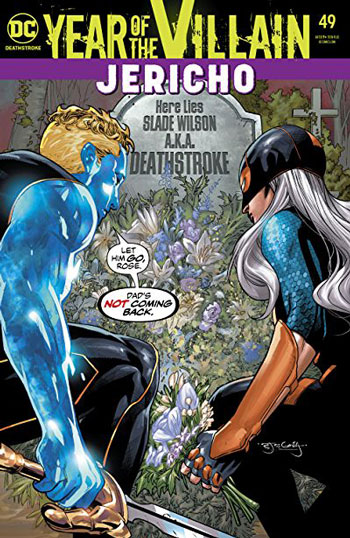 Man, this comic book has been pretty great.

Christopher Priest has written one hell of an incredible series. Each issue is dramatic, action packed, and funny. It has consistently been one of the best books since the Rebirth launch. It is also leading to a big climax next issue.

The beginning of the issue has Jericho wondering if he is a good man. It is a beautiful sequence.

We get to see the past events in his life. It catches us up with the character and shows us where he has been. It also shows all of his past failures and his emotions from it all.

Then, it gets rather disturbing.

This does not bode well for the rest of the world. Slade is pretty ticked off as the power Jericho has received is the power that was meant for him. Slade spends a good portion of the issue regrouping. He isn’t having a good time of things.

He comes across his old friend, Wintergreen. They have a nice heartfelt talk. It is a beautiful writing moment from Priest who provides some excellent dialogue. It is then from that moment that things just get incredibly crazy.

While talking to Wintergreen, Slade gets snatched by Jericho. Jericho flies him high into the sky too, right into space. They have a heated discussion. Then, something crazy happens. It sends Slade hurtling toward earth. Then, we get a cliffhanger that needs to be seen to be believed!

The story is a hell of a lot of fun. It really is a thrill ride from start to finish. Pasarin is one hell of an artist too and does a great job again here. I love the way this series turned out. I can’t wait to see how this story wraps up.