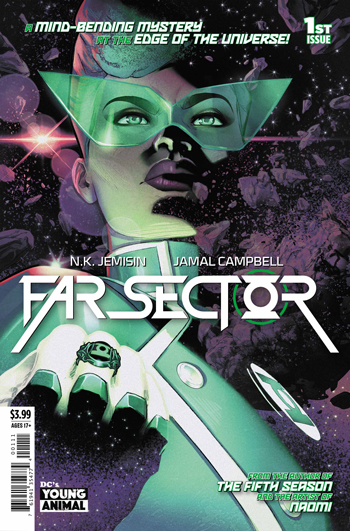 There’s a new sheriff in town. With just the right boots for the job.

Welcome to Platform Ever Forward, in the City Enduring, a techno-societal marvel on the edge of the universe in a galaxy no-one’s ever heard of before. No one in the DCU anyway.

That’s all about to change though. In a big way. Because the City Enduring has just been assigned their very first Green Lantern.

Unfortunately, Earth-girl Jo Mullein has almost no time at all to figure out what she doesn’t yet know about her new alien wards and their world – much less help them – before all hell breaks loose.

Not that this is at all surprising.

DC’s Young Animal imprint has been putting out interesting, experimental comics for several years now, in keeping with their remit to create new DC comic stories for mature readers.

In that same period of time, fan-fave author N.K. Jemisin has been busy carving out a brand all her own, proving herself a force in the world of fantasy and speculative fiction with works such as her highly acclaimed Broken Earth trilogy.

Not the worst idea to put these folks all together, and see what new frontiers of storytelling might emerge. Not at all. Worked pretty well for Gerard Way, with his own excellent Doom Patrol revamp.

Still and all, given that there’s another young, woman of color Lantern who’s just popped up in a big debut of her own, over in DC’s Wonder Comics – their imprint from young readers (and that’s Keli Qunitela of course, the great Teen Lantern of Young Justice – go check it out!) – it does sort of beg the question: Does the DCU really need another new Green Lantern right now?

Well, if you’re Ms. Jemisin, I’m guessing the answer is… uh, yeah, hell yes it does.

Can’t say I blame her. If I was given carte blanche to forge a name for myself in the DCU, I’d be tempted to go team Lantern myself. The opportunity to play in the unknown realms of deep space opera, while wielding the most powerful imaginative tool in existence on your finger? Hell yes please. It certainly suits her.

It’s not, after all, as if the good planet Earth doesn’t demonstrate a remarkable penchant for forging souls with the right stuff to wear the ring. On top of which, the newest kid on the block does have style, you have to give her that.

That much is in part due to the splendid artistry of Jamal Campbell, most recently of DC’s recent Naomi fame, and N.K. Jemisin’s collaborator on a tale set so far in the furthest reaches of space, it may not even be on the official Green Lantern registry.

Which is… a little odd, actually. Indeed, there’s much that is curious about Jemisin’s decidedly off-the-grid Green Lantern story. Which is good. Potentially very much so.

One thing for certain, the set-up does give both creators room to cut wild. Campbell steps up with a panoramic tour-de-force depiction of alien weirdness and beauty, to match all the fantastic flights of Jemisin’s own imagination.

It’s world-building at its fiercest, with results that call to mind Grant Morrison’s sensibilities over in DC’s current premiere Green Lantern project, with bits of Star Trek, Farscape and Blade Runner thrown in for aesthetic, along with a whole lot of the sort of smart, textured political intrigue and jousting that Jemisin is known for in her fiction.

It’s a good mix. Even if, so far, there’s still a lot that is plenty confusing.

Credit to Ms. Jemisin that the confusion doesn’t lie in the narrative, however. Probably because of her primary calling, she’s not afraid of using a fair amount of text in her storytelling. That’s damned refreshing. Calls to mind the sort of highly readable scripting done by masters such as Chris Claremont back in the day.

You know, if Chris were a woke, accomplished, woman of color from the 21st century.

No, the script is fine thanks. It’s what’s behind the script that catches your attention. The little glimpses at the edges that tell you there’s more to this story than political intrigue in a galaxy far, far away.

Take three races, from two worlds, and a brutal civil war that ends only with an armistice that is based on the unthinkable: the elimination of all emotion, in every race – all fear, anger, passion, all feeling – all gone. Then, introduce into this neutered, status-quo system, a glitch. One that unleashes long-buried passions… and the appetites that go with them.

Shake well with one strikingly green arbiter of peace and justice from a legendary Corp of magical ring-wielders, and we get one big “Murder Mystery in Space”. With more on the way. In a society that hasn’t seen any violent aggression at all in over 500 years.

It’s a good pitch. But as culturally evocative as the set-up may be for a certain sophisticated mature reader, there’s still another mystery that promises to be even more interesting. The larger question of Lantern Mullein’s own genesis; a backstory that seems more than a little non-traditional, from the few clues we’re given in just this first issue.

Nothing wrong with that. Well, not for us anyway. I’m sure Jo’s got it under control though.

Mind you, it’s taken the whole first issue just to get all this on the board. Jemisin does an admirable job getting that done. But the demands of it do impose limitations.

For a comic, there’s still one thing we don’t get a whole lot of yet in this first issue – and that’s action.

Thankfully, it looks that’s all about to change, in the second.

Next Issue: Emotions flare! (And Jo shows us what she’s got.)