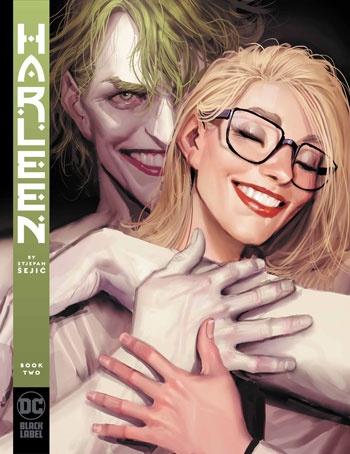 Written and Illustrated by Stjepan Sejic
Published by DC Comics

Stjepan Sejic proves that he is the real deal in this comic book featuring Harley Quinn. He has always been a pretty spectacular artist. Now with this book, he proves what an excellent writer he can be as well.

The results of his work here is just tremendous. I am loving each and every panel of this fantastic book!

The opening of the book has the Joker committing a crime with his gang. Someone gets the upper hand on the Joker.

And that is when Harley Quinn steps in. She beats the perpetrator’s head in with a bat saying “Don’t touch my pumpkin!” It is a violent and brutal scene but it really sets the stage for the rest of the issue.

Harley then watches the news. She sees Harvey Dent being interviewed about the state of Gotham City. That is when we see a familiar scene. Somebody comes over and throws acid at Harvey’s face! It is beautifully drawn by Sejic and he just nails this scene.

Commissioner Gordon then meets up with Harley. He is rather negative about her plans about interviewing inmates yielding any results. But she is adamant. Eventually, she meets Batman for the first time on a roof.

The rest of the issue is basically the Joker sinking his claws deeper and deeper into Harley. Sejic makes the whole thing psychological and it is completely involving. Slowly we see Harley fall deeper and deeper into his line of thinking. And the best part is, we actually understand why as well. It is fantastic.

Sejic has really come into his own as an auteur here. He not only illustrates an incredible story, he writes one as well. This is a masterful work and I love this comic. It is super well done.