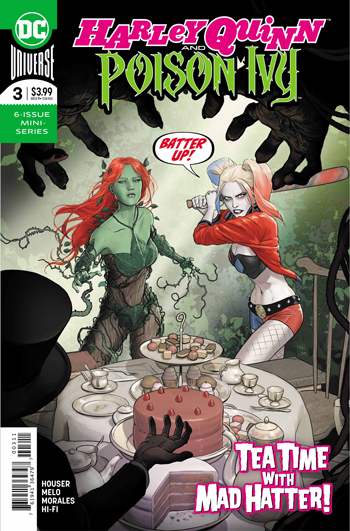 This is a much better series than I originally thought it would be. The story is better than average and it has some pretty nifty art. Jody Houser is a good writer and knows how to dig deep into these characters. The results are pretty good, and better than the usual fare for these characters.

Harley Quinn and Poison Ivy have spent the last couple of issues trying to get to the Mad Hatter for his assistance.

The opening sequence has the girls in the Mad Hatter’s place. They have an extended conversation. It is very strange. The girls don’t necessarily trust him, but they don’t have much of a choice.

Of course, Jervis is up to no good. He does something to Harley’s helmet. Then, he goes back to the girls.

And what do you think happens?

Well, the Mad Hatter launches an attack on the two main characters.  It wasn’t much of a surprise but it is very well handled.

The fight is drawn pretty fantastically. Melo is an excellent artist and this fight really lets the artist cut loose. The ladies win and make short work of Jervis. Then, they go on their way.

That’s pretty much it for the issue. Not a lot happens but it is entertaining. The art is the best part as is the characterization’s Houser gives the two leads in this slight, but enjoyable series.