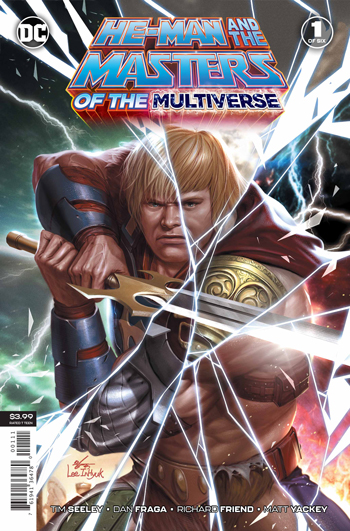 DC Comics has produced several great Masters of the Universe stories over the years.

Tim Seely’s highly entertaining MOTU vs. Injustice miniseries finished in January, and he’s returned to Eternia with what could be his most ambitious work wielding the power of Grayskull.

Working with different iterations of characters from a famed franchise can be either a good thing or a bad thing.

Within the first few pages, Seely proves we’re in for a real treat.

Anti-Eternia is the mirror universe of the Eternia, and perhaps it’s highest chance to stop the evil scourge is Prince Keldor, the man who would be Skeletor.

He’s recruited by two versions of the He-Man to help them save the multiverse. I’m not going to spoil which iterations here. One version is well known while the other is ridiculous; however, Seely made it work very well.

This issue is a labor of love.

Lots of nerdy details appear throughout the book and are executed to perfection. All eras of the franchise from obscure to conspicuous can come into play at any time. The antagonist debuted in the German audiocassette series in 1985 and in 2016 became a popular chase action figure for die-hard collectors. You don’t need to know any of this to enjoy how Seeley presents the character in the story.

Sometimes it can be jarring to see different art styles interacting on the same page since consistency is vital for a visual medium. Dan Fraga’s artwork is on point and beautifully produces the look and feel of each character and landscape of the respective era. The two He-Men mentioned earlier are complete opposites of each other. Yet, Fraga made it work, which augments an already fun narrative.

This is the Masters of the Universe story I’ve been waiting for. I just didn’t know it until now.

Whether you’re a fan of all things He-Man or only have love for the 80’s Filmation cartoon, the inside baseball nature of the story doesn’t flaunt it’s knowledge in the reader’s face to prove a point. It uses that information to craft an exciting story that all MOTU fans will thoroughly enjoy.