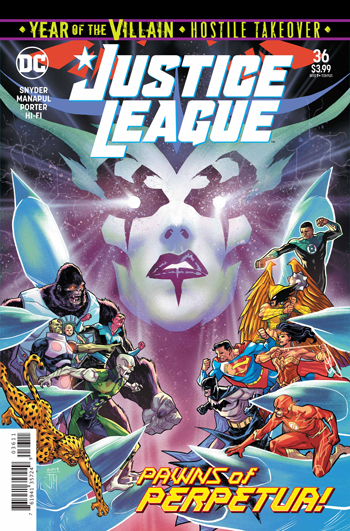 “Justice League. Step out of the Hall now. Lay down your weapons and go to your knees. Subjugate yourselves before Perpetua. Kneel before Doom.”

That’s more or less it.

That’s where we are. That’s what happens.

Lex Luthor, gone full on Fiend of the Darkside, leading an insurmountable assault of demonic Alpha Predators against the mighty Hall of Justice and an assembled throng of Justice League warriors from across time and space.

Maybe, as Batman suggests, (I don’t say he believes it) – maybe, as he suggests, one final noble and courageous fight against impossible odds, along with the few fragments of the Totality that the combined League still have in their possession, may together somehow be enough to win over a Universe of souls that have lost faith in Justice and tipped instead fatefully towards the workings of Doom.

Will it be enough??

But hey, then again, maybe. Sure.

There are some definite surprises in this issue, after all.

Take the Legion of Doom. Did not see that coming.

Arguably, it’s the sort of thing that you should see coming. (Given that they’re a society of supervillains after all.) Regardless, there’s a nice little lesson in store for Luthor’s compatriots in this issue, and for us too – and for Lex, for that matter, if he’s even listening anymore. (He’s not.)

And, there’s Hawkgirl. Who evidently is still powerful enough, all on her own, to warrant Dark Perpetua dispatching her second favorite son, the Anti-Monitor, to ensure her death by his own hand.

Overall however, the forces for Justice appear well outnumbered, even given the many opportunities this presents our artists Frances Manapul and Howard Porter to render the fully assembled array of DCU’s finest.

That said, I can’t fail to say that I’d be that much happier if there was only one artist on each individual book, especially here at the end of this very long, well-tended story arc. But I’m guessing by now, it’s just not easy to fully keep up with the demands of Scott Snyder’s storytelling ambitions. So, it is what it is I guess.

We do get at least one splendid shot by Manapul of the Anti-Monitor towering a full head shorter than his cosmic Mother Perpetua. It’s the culminating sign of over a year and a half of tremendous artistic output and design all slaved to present for us, here on the cusp of 2020 the greatest latest threat to a Multiverse that is even more mysterious and significant than ever previously realized.

We hardly have time to waste now that we’ve reached that crescendo of all that effort, to get Lex’s troops on the field for his final battle royale. One that almost feels anticlimactic given all the foreshadowing that got us here. But one that is determined to fit the Go Big or Go Home spirit of the saga. Wait till you see what happens to the Hall of Doom.

It’s a sign of hope and inspiration on the cusp of utter defeat at the hands of DC’s most maleficent Cosmic Power ever. Will it be enough to turn the tide and save the day??

Here, look, just kick the football. We’ll hold it right there for you.

Next Issue: The Next Worst Thing?