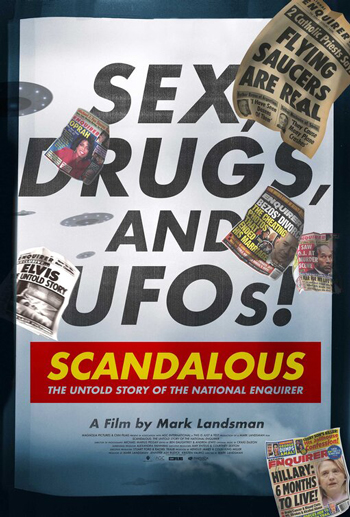 I distinctly remember a TV movie from the 80s called Scandal Sheet. It had an impressive cast, including Burt Lancaster, Robert Urich, Lauren Hutton and Pamela Reed.

It was a sensationalistic, but scathing critique of reviled rags such as Star and, of course, The National Enquirer.

At the time, I found the Enquirer and its ilk to be both laughable and disgusting. A new documentary called Scandalous, however, paints a decidedly more shaded view of the origins and workings of The Enquirer.

It’s not necessarily rosy but it’s a little more even-handed.

I was fascinated to learn that the newspaper was initially bought by a man named Gene Pope, who had rather obvious ties to the mob.

He did a great deal of research to realize his dream of having the newspaper with the widest circulation in the country. He initially learned that people wanted to see gore, so he would pay for violent and bloody photographs of car accidents and murders and such.

However as he expanded, he wanted the newspaper to appear at checkout counters in supermarkets and so on order not to offend or turn people off, gore was out and he focused more on sensational stories, usually about celebrities.

The paper was often sued, but would also make deals with celebrities that they had found dirt on. It would agree not to print a certain tawdry news item in exchange for exclusive rights to other stories and photos involving said celebrity. It was a very wise business move and mostly paid off handsomely for them.

There are many interesting stories along the way, including the Enquirer‘s ruination of Gary Hart, finding key evidence in the OJ Simpson trial, dealing with Donald Trump — who would often pose as an employee of himself to deliver information on his “boss”, the whole Lady Di scandal which led to a huge dip in sales for the newspaper, etc

Many of the publication’s writers are interviewed here and they talk about the shark pool intensity of working there, but many all those who did work there for years found it to be exciting and rewarding.

Just when I thought perhaps the documentary was leaning a bit too far into a positive view of the tabloid, it would bring to light the many obvious negative aspects as well.

I appreciate that the film gives the writers and their research and doggedness their due but also is clear-eyed about how the paper also destroyed lives and altered political history, many would say for the worse.

Whatever your views on the paper, this is a very entertaining and informative documentary.