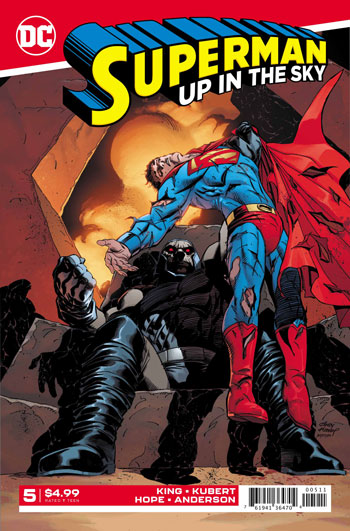 Tom Taylor has put Superman through the wringer on his galactic quest to find a kidnapped little girl.

Dream sequences, time travel, and other crazy adventures towards the next clue have had next to no rhyme or reason.

Darkseid is the next contestant with some intel on the girl’s whereabouts, but of course, he’s going to make Superman work for it. Supes will have to break his one rule to get the information he needs and reluctantly agrees to carry out the request. It’s a sympathetic situation.

However, Superman still had difficulty carrying out the request.

Tom Taylor had a good idea, but the execution fell flat. It was never explained how Superman learned Darkseid had a clue about the little girl. It was also never revealed what the clue actually is once Superman did the deed.

Story number two is mostly a day in the life of Superman that plays like a greatest hits collection and ends with Clark and Lois Lane on a date.

There is a twist, however, where everything is not how it appears. Since next month’s issue closes out the series, I hope there is no more filler. Both stories in the finale need to address the main plot while answering every question directly. It’s the answers that Taylor fails to provide. The reader is thrown into the thick of it with no set up at all. This style of storytelling comes off as a series of single one-shot issues instead of a connected story, which did not serve this series, or, this issue well.