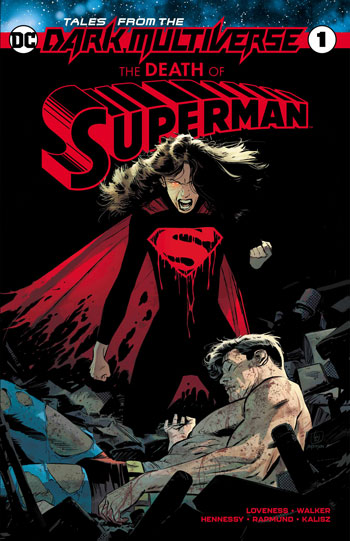 These Tales from the Dark Multiverse stories have been fairly dark! I love a dark comic book! They really push it here though where the creative team focuses on the Death of Superman.

It is a hell of a book from start to finish. At a certain point, I just could not believe what I was reading.

This issue starts off with the epic fight between Superman and Doomsday.

We have all seen it before. But artist Brad Walker is so damn good that the pages actually feel fresh! The image of Lois holding a deceased Superman is pretty much one of the best images he has ever drawn.

And that is really saying something.

And that is when she encounters the Eradicator.

The Eradicator then hovers above her. He realizes that he has failed Superman as he was supposed to protect him. Lois feels the same way about herself. That is when they decide to join forces and Lois essentially becomes the Eradicator in the flesh!

Lois then quickly crosses the line with her newfound powers. But she is doing it all in the name of Superman. Batman tries to talk to her. She isn’t hearing it. They have a big fight. Then, things get really insane as it starts to tie on to the Return of Superman storyline.

The ending is insane. Kudos to the creative team for just going for it. The artwork is some of the best of Walker’s career. This is a great little treat and a real gem. Worth taking a look at.