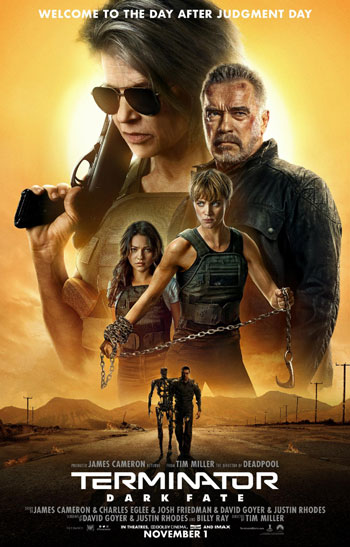 Arnold Schwarzenegger is back!

Linda Hamilton is back! She is kicking ass like she never left the franchise.

James Cameron is back! Well sort of. This time in a producing capacity for the franchise for the first time since Terminator 2: Judgement Day.

Everything should be right in the world and Skynet is in its place.

However, all is not as well in Terminator Land as it should be.

The movie that I have been waiting for for a long time wound up being yet another installment of “Just because you can do a thing, perhaps you shouldn’t do that thing”.

What should have been the Return of the Jedi of the Terminator franchise, Terminator: Dark Fate actually shares all the same beats, tropes and themes as The Force Awakens.

A whole new generation of AI, now called Legion instead of Skynet, have been created in the new future that was created when Sarah Conner stopped the original Skynet. A new Terminator, a new protector, and a new young savior are helped by an aging original T-800 Terminator and previous savior to stop the inevitable future we all know can’t be stopped. The original characters are even relegated to sidekicks in this new terminator story for a whole new generation.

Tim Miller, the director behind the Deadpool movie, has set the bar pretty high by saying that this Terminator installment will ostensibly nullify the past four Terminator sequels and reset the franchise back to T1 and T2 making this the de facto third film in a trilogy. A bar set that high, expect my expectations to be set even higher.

That being said, in my humble opinion, The Terminator never needed a sequel to begin with.

Sure, I loved Terminator 2 when it came out, but man, that movie does NOT hold up upon rewatching.

Yes, you read that right. I feel like Terminator 2: Judgement Day was unnecessary and actually lessens and weakens the story of the original film. I will say that the original director’s cut of T2 makes it infinitely better but still extraneous. They still never explained at all how the T-1000 went back in time in the first place if only living tissue can be sent back in time (a fact they really harped on in the first film).

I was hoping beyond hope that Terminator: Dark Fate would right the ship and steer it into better uncharted waters. I will say that it sort of does and then it really doesn’t. It rehashes all the stuff you loved about the first two movies with better effects and higher octane stunts and action.

And to be fair, that is want most people want from their sequels. More, bigger, faster, louder, regardless of how weak the story is.

My hope for this film was that with Linda Hamilton being back that this film would have its heart back. The problem I felt with the previous trilogies were that they were missing Sarah Connor and her story of sacrifice and loss. She was the focus of the first film and the second film, along with John, her son, who would one day rise up and turn the tide of the fight of humans vs machines.

Unfortunately even with Sarah Connor back the film still left me with the same feeling. Why make it?

Director Miller tries his hardest to recreate that drama and heart of the first movie with a plot not too far removed from the original film. A new savior of the human race, Dani, unbeknownst to her is targeted for termination. Her new protector, Grace, an enhanced and modified human resistance fighter is sent back to protect her from the new big bad robot, the REV-9 sent to kill her. It is all “by the book” Terminator fair that you have seen before just with better effects. Miller can definitely direct the hell out of action sequences. The first chase sequence is pretty impressive.

Hamilton is amazing. She is hardcore and as angry as she was in the second film. Maybe even more so after the events at the beginning of this film set her on a warpath. I loved seeing her back in the boots of Sarah. Even though she is relegated to a side character at times she still outshines both the other protagonists.

Arnold is Arnold and this new version of the Terminator (if you remember he sacrificed himself at the end of T2.) is an interesting direction to take the unstoppable killing machine, even if the reason for his return is dubious and sort of slipshod storytelling at best.

Makenzie Davis’s Grace as protector to future savior Natalia Reyes’s Dani and Gabriel Luna as the new fancy Rev-9 Terminator were mostly bland and forgettable. The relationship between Grace and Dani is very predictable if you have seen any of the previous terminators and the new Rev-9 is basically if you stuck the T-800 endoskeleton inside the T-1000 liquid metal body and painted it black.

The movie really starts to fall apart for me when they try to start explaining the why and the how of the future, and how it differs from the one Sarah prevented but still ultimately the same.

Machines rise up, find humans to be the enemy, try to wipe them are stopped when a single human rises up and unites the humans to defeat the machines. The idea is that the future is inevitable because of who we are and the technology we have created.

Overall the movie is enjoyable if you don’t think about it too long. Like I said, the action sequences are well done and the effects are solid. I would not expect anything less from a James Cameron production. I didn’t love it and I also didn’t hate it.

I think therein lies the failure of this film for me. I was completely un-wowed by it. When it wasn’t rehashing previous ideas and nostalgic “oohs and ahs” I couldn’t have cared less. Sometimes, more is just more and not better.

Case in point. The movie keeps ramping up the action and the peril the characters find themselves in becomes more and more insane, the situations become more and more intense  to the point of ridiculousness.

At one point I tuned out because what was happening would have made Michael Bay say “Maybe tone it down just a notch or two guys?”

I am sure this movie will make buckets of money. Enough to ensure yet another trilogy of films that will one day be retconned when another auteur filmmaker comes up with another “mind blowing” idea that will undo these films. Thus fulfilling the ultimate truth of the Terminator films.

The truth that they absolutely will not stop… ever, until we are dead.