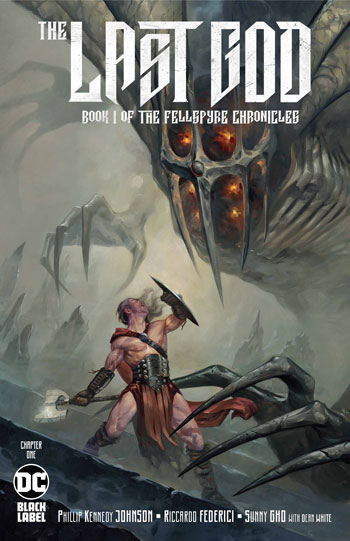 I was immediately attracted to this book due to the artwork of Riccardo Federici. His art has graced the covers of many DC titles over the last few years; it’s always stunning and I was looking forward to see what he would accomplish with some interior work on a comic.

I was not disappointed in the least.

I am also happy that this had a pretty amazing story alongside the stunning artwork.

The book takes place in the land of Cain Anuun. The map of the land in the back of the book immediately calls to mind The Lord of the Rings.

We are then given a lot of back story and history of the world that we are reading about.

We are told about things like a pestilence called the “Plague of Flowers.” We are introduced to the Godslayers. We get to see King Tyr and his ascension to be a king.

Apparently, he is the one who went to the Black Stair and killed the Last God many years ago. But, as some of our characters learn later on, that may have indeed been a lie.

Thirty years ago the good warrior Tyr killed the last living god. When that happened, all of the dark forces seemingly disappeared. The army of the dead went away and things became peaceful. But of course, it is now thirty years later and all of that might be undone.

We get to see some of the colosseum-type of events that King Tyr holds. We then see the King start to keel over. It is looking like his reign is coming to an end. There are seemingly dark forces at play.

And that is when the issue just goes into full horror/fantasy mode.

The dark forces attack! The army of the damned is back! There is all sorts of destruction that happens. It really allows Federici to cut loose with the art. The design work is especially excellent and the world building is tops. This whole book just works incredibly.

By the end of the issue, two fellowships have formed. They have to go back to the Black Stair and kill the Last God for real this time. But can they do it?

That is the cliffhanger that finishes the issue and man, is it a doozy.

The writing is as strong as can be.  Phillip Kennedy Johnson does an amazing job with writing an epic story. The details make it work and take it a step further than the normal comic book.

Depending on how many issues this is, and how deep the story goes, this could be a classic. Time will tell. For me though, this is an incredible start to the story.

I commend the Black Label line at DC for taking a chance with this unique and gorgeously illustrated book.