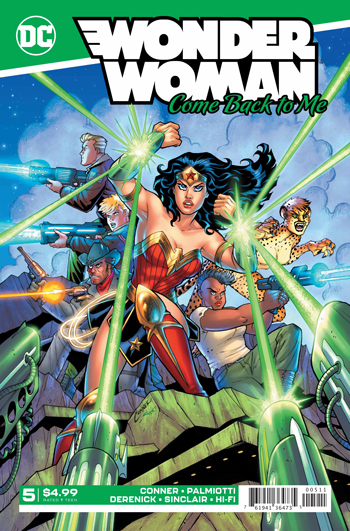 Conner and Palmiotti have provided an excellent balance of storytelling to this series.

While this once giant-sized Walmart exclusive now repackaged for comic shops is targeted toward those who don’t pick up comic books on the regular, there is more depth provided that will appeal to pull list devotees, too.

Wonder Woman, Cheetah, and Princess Sibella are forced into the Arena of Death by their captors. Princess Sibella, who has been a fish out of water in this story thus far, takes to the combative affair quite easily.

Wonder Woman, on the other hand, tries to figure out a way to escape without having to kill someone.

The use of Cheetah here is toned down from the last issue, but Tom Derenick provides some fun visuals. Cheetah waiting her turn to fight while watching the other bouts like a crazed fan, was pretty cool while highlighting her insatiable lust for blood.

Jonah Hex uncovers a particular revelation that something is afoot. The twist came off very well not only because I didn’t see it coming but because the conspiracy involved to keep it all on the down-low was rather diabolical. It was all done in the name of entertainment.

Creating a Crunk chain-wearing giant jaguar to hatch an evil scheme will certainly pop a rating. Derenick drew up another cool treat where Wonder Woman slowly emerged from the shadows behind the culprit as they revealed their evil plan.

The image exuded the feeling that Diana is about to lay the smackdown on some alien scum. While Superman’s Up in The Sky mini has been less than stellar, Amanda Conner and Jimmy Palmiotti has produced hit after hit with this series. They did a great job of setting the stage for what looks to be a fun finale, and I wouldn’t mind seeing their work on the main on-going series someday.