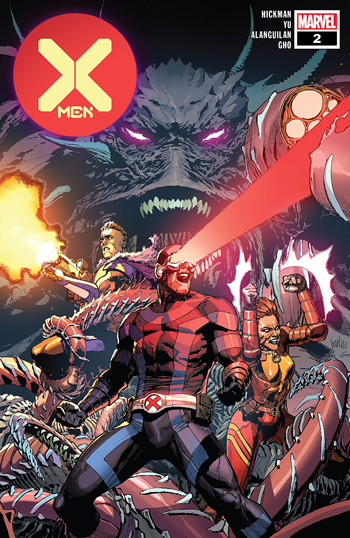 I have always found the Summers family dynamic to be tedious and irritating.

Between Scott and Jean Grey, their alternate-future daughter Rachel, his son Nathan (with Jean’s clone, Madelyne), the mystery of his and Havok’s brother and Mister Sinister’s interest in all of it, I was thoroughly bored by it all.

That’s why I find it so surprising that I’m very much enjoying a comic that is grounded in that family dynamic.

And yet, here we are in the Dawn of X.

While Krakoa and its people are in the midst of upheaval, Jonathan Hickman presents a simple tale of Cyclops and his kids, Prestige (Rachel’s new code name) and Cable (the teenage version of his time-traveling son), on a simple mission to investigate a mysterious island and fight some monsters.

That island is Arakko, Krakoa’s twin which was split from it in ancient days. Krakoa is moving toward it, and the Summers clan flies off for a recon mission. Of course, there are strange beasts, and of course there are fights.

But there’s also a genuine love between and familiarity that radiates from the page. In between monster scraps, Scott shares stories of his travels, offers to take Rachel to Hawaii (as well as a Shi’ar territory of incredible beauty), and gently ribs Nathan’s aggressive nature.

For a book with otherworldly beasts, the scale feels much smaller because of Hickman’s choice to focus tightly on the Summers clan. While that makes for a sweet diversion, it also shortchanges the mystery they face in the latter half of the story, the summoners of Arakko.

The name is literal, as these albino beings can call forth demons and other beasts. A language gap causes a misunderstanding, and a bad judgment call from Nathan threatens to compound their trouble, but quick thinking and conversation save the day.

I mentioned last time how Leinil Francis Yu’s artwork does justice to Hickman’s intimate storytelling, but in this issue, it might be too much. While he is skilled as always in rendering action scenes, his monster design is muted, lacking weirdness and color. That’s a shame, because Hickman’s script actually plays up the absurdity of the adventure.

After all, you don’t get to see an island reunited with its soulmate every day.

Love and family seem to be the central themes of this book. In the foreground is the love between Scott and his kids, but there’s also a hint towards the current nature of his relationship with Jean, plus the love between Krakoa and Arakko.

And then there’s Apocalypse, lurking in the background, revealing that the summoners are descended from one of his “children.” It’s a good thing Scott Summers has his family close by, because he’s likely going to need them.