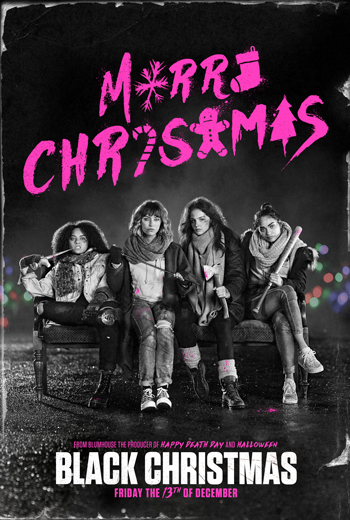 As someone who works every day in the artificial technology (AI) space, I know first-hand the impact that this burgeoning technology can have on people. Concerns over automation of jobs and replacement of human interaction in society are not without merit, but who would have thought this could spread to Hollywood, as I believe I just watched the first movie with a script churned out by a machine.

As the closing moments of the new (and second) remake of Black Christmas flashed upon me, I realized that I had seen the future: a desolate wasteland of movies in which horror films are generated by robots fed an endless stream of politically timely Tweets and recycled, neutered 2000s slasher tropes.

I won’t dignify this film’s narrative by giving a proper plotline, but basically a someone is stalking a bunch of sorority girls and killing them off during the weekend before Christmas break.

Sure, there’s a few “subplots”, but that would imply any of them have any substantial weight beyond social commentary. There’s a grossly mishandled sexual assault backstory to our lead character (Imogen Poots), but rather than giving into a proper exploration of the trauma someone in that situation inevitably deals with, the film simply uses her as a pawn between the two sides of the sociopolitical debate on college rape culture. The agency of the character is largely removed, never responding or acting without being prompted to by another character.

Speaking of characters, those are usually things one expects to find in movies, but there’s only strawmen to be found. I’d say the characters were one note, but most of them had no personality to begin with. I frequently found myself struggling to remember most of their names, and they few that I did, I wanted nothing more than to forget. I initially thought this might be the out of touch writing of a 40 year old male screenwriter trying to get his finger on the pulse of what’s socially relevant, but was even more shocked to discover the film was written and directed by a woman, which makes the results even more embarrassing.

If you found the lampooning of “SJW’s” in Eli Roth’s The Green Inferno to be insufferable, nothing will prepare you for the eye rolling cavalcade of buzzwords that are meant to stand in for dialogue here. Everything from Camille Paglia, “I like beer.”, and “Not all men” get name dropped, and its all so jarringly without nuance, one almost feels bad that Brock Turner didn’t get a mention in this social commentary shitshow.

But hey, you might respond “Well it’s a horror movie. I’m here to see some people get killed”. To that I say, just fasten your seatbelts as we continue to our next stop on the disappointment train.

At a milquetoast PG-13, there’s virtually no blood in the movie at all and most of the kills are off-screen, frenetically edited out of a fear of the MPAA even giving this thing a second look before it could be unceremoniously unleashed on the unsuspecting public. Everyone remembers the iconic asphyxiation by bag death in the 1974 film, but outside of a bland homage to that here, there’s no iconic set-piece or imagery to be found.

A slasher movie is only as good as the killer, right?

In this regard, the 1974 film was highly subversive, never giving us a proper glimpse of the killer outside of a few shadowy close ups and never revealing his motives. This not only ratcheted up the suspense but gave a real sense of dread once the iconic ending comes into play, cementing it as one of the greats twists of 70s horror.

On the other hand, the remake foists an army of bad Doctor Doom cosplayers that we’re not only supposed to take seriously but applaud as terrifying symbols of toxic male masculinity rising to reclaim dominion over women. I’m sorry movie, but when all I’m thinking about is Frank Langella’s Skeletor from Masters of the Universe, you’ve screwed up. The final confrontation ends in a bizarre action brawl that, I kid you not, is only won when the demonic power of the patriarchy is literally smashed to pieces.

While the original film boasted a great cast rounded out by the likes of Margot Kidder, Olivia Hussey, and John Saxon, Black Christmas 2k19 saddles us with Imogen Poots…and about 10 minutes of Cary Elwes. Poots continues to find herself in a category of talented actors I refer to as “must be getting blackmailed by their agents” as for every Green Room she shows up in, she’s in about three other movies that make me wonder what she was thinking. She’s great here, but the lackluster script gives her very little to do. Elwes is always great, though is largely absent from most of it that one wonders why he’s even there.

Black Christmas (2019) will likely go down as one of the more infamous horror remakes out there, joining the ranks of The Wicker Man and Rob Zombie’s Halloween 2, as it leaves scratching your head and wondering just what hell the filmmakers were thinking.

It’s so thuddingly misguided in every direction that one wonders whether this is some elaborate attempt at satire that was somehow played completely straight and without a shred of irony. If it is, then I have been conned. If it isn’t, then I really hope Bob Clark is comfortable spinning in his grave.