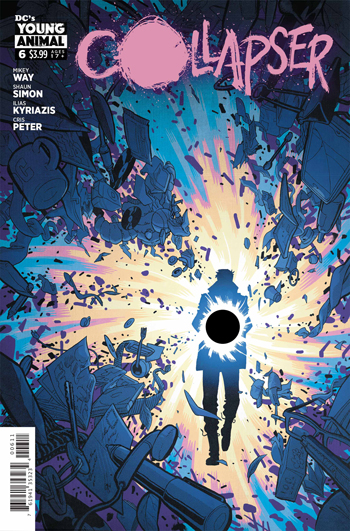 This has been a great little miniseries. It has a very strong story with some amazing characters. I have been enjoying this more and more with each passing issue.

Shaun Simon and Mikey Way have created a simple comic book that really spins the superhero genre on it’s head. It has been really refreshing and this is a fairly decent final issue of the series.

The opening pages show Liam’s father in control of the people of the world.

They all proclaim, “Triumph is yours. Triumph is ours!”

The father is apparently in possession of a black hole. He wants to use it to reshape the world into his own personal fascist dystopia! The first few pages demonstrate how powerful he has become.

We then cut over to Liam, who is understandably upset. His father is supposed to be dead. Yet, here he is, causing trouble. His ex-girlfriend Vanessa Volt is also the one who gave the black hole to his father! Liam knows that he has to stop his father. He just has to get over his panic attack to do so.

Liam has to regroup and get himself together.  Then, he is off to fight! He faces off against his father. He then learns that his father killed his mother. This really hits Liam hard and his mind and emotions really start to come apart. Things start looking a bit bleak at this point.

The ending is a little predictable, but it was so well handled that I didn’t care. This was a well done comic book from start to finish. The best part of this book was the expressive art by Ilias Kyriazis. Kyriazis will go places after this.

This is a nice little miniseries for sure. I am sad that it is over but I am glad that I got a chance to dig in and read it.