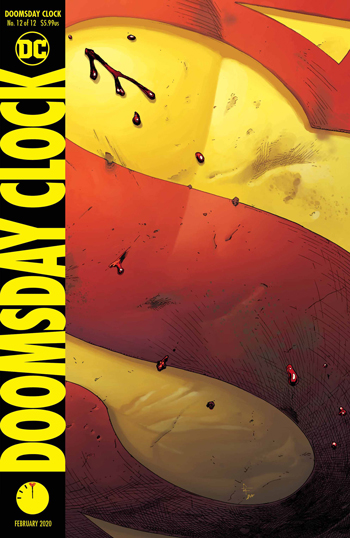 When it launched, Geoff Johns and Gary Frank’s Doomsday Clock was promoted as not only a follow-up to Watchmen, but the epic conclusion of the DC Comics Rebirth story, which implied Dr. Manhattan left the Watchmen world and created the darker New 52 DC Universe that was already being phased out in favor of a return to more traditional heroism.

The story was said to take place a year into the future, with the rest of the DC superhero line ultimately planned to catch up to the story.

That was the plan, anyway.

Shortly into its run, the series was switched from a monthly schedule to a bimonthly release. Scant references to coming or them-current events like Heroes in Crisis were worked in, then become less frequent as the DCU had to progress past Johns’ plans.

Then after Justice League failed at the box office, Johns left his role has DC’s head creative officer, opting to continue his film work with them as an independent producer.

And then Damon Lindelof’s take on Watchmen debuted on HBO. Both a follow-up to and reimagining of the original story, the series garnered rapturous critical acclaim, leaving Doomsday Clock out in the cold in terms of fan acclaim and even narrative significance.

I haven’t come to argue Doomsday Clock‘s place as part of the fan canon, nor have I come to compare it HBO television series. But on its own merits, Doomsday Clock feels frustratingly uneven.

Yet when it becomes a look at the state of the DC Comics heroes through Dr. Manhattan’s eyes, it finds some success as a sort of journey of self-discovery, framing the godlike antagonist as a sort of creator surrogate, realizing that he was wrong to mess around with the DCU’s spirit of heroism. Or perhaps it’s a displacement of blame onto the fans for rejecting what he gave them, both on the page and on screen.

Mining that vein gives the story unexpected thematic depth, but Johns and Frank lose points the more they ape the structure of Watchmen, from the nine-by-nine page grids to which Frank holds true, or the use of a work within the work, substituting the original story’s grim pirate comic with a controversial film noir.

After all, Watchmen wasn’t just a dark deconstruction of superheroes, but a rich, layered tour de force of graphic storytelling, a landmark statement from Alan Moore and Dave Gibbons that comics could be spoken of in the same breath as literature. Try as Johns might, there wasn’t much chance he was going to reach those heights with a Superman/Watchmen mashup.

Just to be clear, he didn’t.

Doomsday Clock #12 brings us to the fireworks factory, as Superman and Dr. Manhattan finally meet face to face. Manhattan is a little too thrilled by the nothingness he sees past this encounter, while Superman is perplexed by the former Jonathan Osterman and what he’s talking about. Before the two can really get into it, the combined superheroic forces of Markovia and Kahndaq, respectively led by GeoForce and Black Adam, attack the Man of Steel.

The hope for humanity apparently lies in Batman and Alfred convincing Reggie Long, the former Rorschach II, to look past his cynicism and help them find Adrian Veidt. But then…it doesn’t. Instead of that thread playing any substantial role in the conclusion, Superman simply convinces Dr. Manhattan to save his world by appealing to his past humanity and better nature.

And then, after a few pages of darkness, Dr. Manhattan rewrites history once again, correcting the metaverse and bringing the Justice Society and Legion of Super-Heroes back into existence, who show up in the present and help fix the world.

The last sixteen pages are a tour through the past, present, and future of the multiverse. The Pre-Crisis Earth is re-established as Earth-2. Post-Crisis Earth-1 is now Earth-1985. The New 52 Earth is now Earth-52. Events in 2020 lead to a Crisis in 2025. A Crisis in 2030 seems to bring Superman into conflict with The Avengers. And so on, and so forth.

Johns has one last card up his sleeve to close out the book, and while it’s a hopeful note, it’s extremely saccharine. At the end of an uneven series that finally found its groove as an honest exploration of the relationship between creators and fans, Superman literally saves the DCU and Watchmen world with the power of hope.

Whike I agree with the sentiment, and the series’ commitment to returning Superman to his place as the DCU’s focal point, Johns doesn’t stick the landing for me. It’s a clumsy, protracted ending that is ostensibly meant to build excitement for the future of these characters.

Instead, it just feels wearying. Johns tries to subvert Manhattan’s sentiment at the close of the original Watchmen–“nothing ever ends”–by having him realize everything does indeed end. But the actual ending of this book feels more like wheels perpetually grinding, and the promise, or threat, of these narratives continuing to play out for the rest of existence.

The good news is that Gary Frank concludes the series on top of his game, turning in some of the best work of his career. If anything in this book is close to the original Watchmen, it’s the veteran penciller, who channels the best of Gibbons’ body and facial language, and marries it to the scale and dynamism of George Perez.

Past that, I don’t really know what to say. If you’ve been following the series this long, you may as well see it through to the end, but on the whole, the story is a mess to slog through in order to get to the high points.

On the upside, Osterman is right. Everything ends. And thankfully, so does Doomsday Clock.