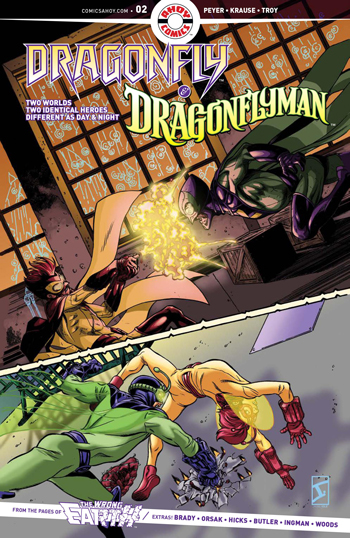 This comic book continues the story of the comic series The Wrong Earth.

Writer Tom Peyer is creating a deeper tapestry for the world he invented here. The story of the same hero in two different realities(one campy, one dark) really makes the reader sit up and watch what is going on with excitement.

We start off on Earth Omega with Dragonfly waking up befuddled. He is asking for his sidekick, Stinger, who is nowhere to be found. He sees the Devil Man tied up. He asks him where Stinger is. The Devil Man taunts him by saying that he doesn’t know and that maybe Dragonfly has actually killed him. It is a pretty ominous scene to start a book off with.

From there, we go over to the goofy Earth Alpha. Dragonflyman and his partner Stinger fight another version of the Devil Man here on this earth. It is a nice parallel to the previous scene and it is very exciting and funny. It beautifully and skillfully compliments that very first scene. Peyer is a great writer and makes the whole thing feel seamless.

We then get to see the  dark Dragonfly torture the Devil Man about his partner’s whereabouts. It is a brutal scene that demonstrates how far this character is willing to go. We then cut back to the other earth where Dragonflyman and Stinger foil a bunch of criminals. It is really cool to see that both of the heroes on both earths are headed towards the same goal.

We are left with a strange cliffhanger at the end. I am intrigued where Peyer is planning to take us from here. He certainly has my full attention. I think that it is going to be great.

The artwork by Peter Krause is fantastic as well. He is one of the unsung heroes in comics. His work is consistently great. Hopefully this brings him more attention. His artwork is of the highest quality here on this title.