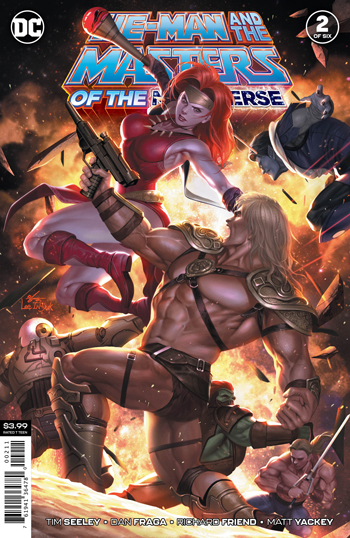 The scourge of Anti-Eternia He-Man continues as The New Adventures of He-Man universe is on the chopping block.

Prince Keldor is an inspired choice for a protagonist. Tim Seely does a great job of highlighting Keldor’s inner conflict, which is augmented by the knowledge that he’s the only good one. Every other version of his being is some type of Skeletor.

Speaking of Skeletor, the incarnation seen in the 1990 animated series is a bumbling buffoon that is hard to take seriously.

Here, Seely made him the most menacing he’s ever been.

In fact, this comic book is probably the best Space He-Man thing, ever. It’s almost a tribute to the often-panned series because there was so much potential that was never realized.

The tongue in cheek nature of the cartoon is nearly absent, which made it plausible that Space He-Man might defeat Anti Eternia He-Man.

The pairing of Dolph Lundgren He-Man and Trappers of Grayskull (mobile game) He-Man is a complete dichotomy. It shouldn’t work, but it does. Dan Fraga’s illustrations are a thing of beauty in terms of mixing different styles of artwork and having them interact with one another in a fashion that isn’t jarring.

Overall, this second installment maintains the highly enjoyable ride of the first issue. The story progresses while keeping true to the tone of the narrative in a completely different setting. It’s easy to see this is a labor of love for Masters of the Universe fans, and I can’t wait to see which universe we visit next.