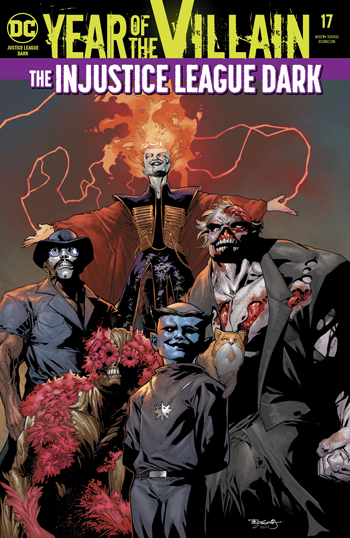 “At least it can’t get any worse.”

And this issue of Justice League Dark does everything it can to demonstrate that.

There’s no surprise to this.

After all we’re in the last stretch of the Year of the Villain, this act of the DC’s latest multiversal crisis.

So, it’s time for some villains.

Author James Tynion is happy to oblige. So is artist Javi Fernandez who does a fine job with the cinema this month.

And so is Circe, diabolical mastermind of a war for the soul of all Magic, a war Wonder Woman and her magical team of Leaguers are only just beginning to figure out.

At a steep cost.

Already, Kirk Langstrom, Man-Bat, has been ensorcelled to make himself truly monstrous… and very dangerous.

Swamp Thing is a handful of goo.

Diana has herself been possessed by Circe, who begins caressing the Eclipso Black Diamond (with Eclipso inside) as soon as she can get her hands on it.

That leaves only Bobo, Zatanna, and John Constantine, along with the un-helmed sorcerer Kent Nelson with apprentice Khalid, to expose the truth and set things right. Normally that would be more than enough power in one gathering of magicians to handle a threat like Circe.

But that’s no longer true. And of course, we know Circe’s been busy.

Time for the Injustice League Dark ™ to take center stage. Papa Midnite, the Floronic Man, Klarion the Witchboy, and Solomon Grundy – all together again for the first time, and juiced up (or at any rate standing up) with the full spectrum of Circe’s new power behind them.

Of course, now that Circe has all five of Hecate’s Witchmarks under her thumb (and a newly updated origin story of her very own) she probably doesn’t really need her new teammates. As she quickly demonstrates by dispatching two more of our League to impotence with ease. (Good thing Zatanna’s been to this rodeo before. Eeuch.)

Still it’s good to have allies. And the roster – along with several certain collected magical artifacts of tremendous power – will ensure that next issue will feature a truly spectacular magical battle, with more power flying around than this book has probably ever seen. Which is saying something.

Still and all, this book continues marching forward with what continues to be a very depressing chapter of DC comics all around, as Doom continues to roll across the Multiverse with so much chaos that Tynion’s plans for Diana and the Hall of Justice don’t even seem to affect anything going on over in Scott Snyder’s current, similarly amped up Justice League saga.

But that’s just the beginning. Because waiting in the wings all this time, is the magical spearpoint of the Dark Multiverse’s encroaching madness – the Otherkind.

Next Issue: Time for Wonder Woman to live up to her name.