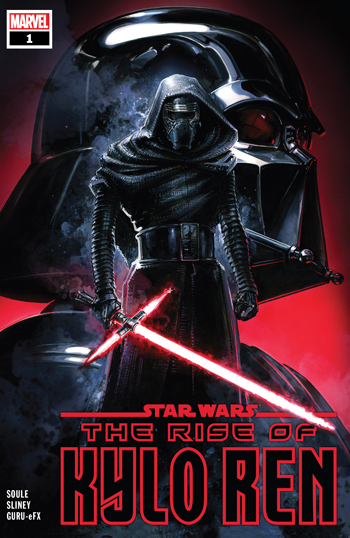 Two questions have caused rampant speculation in the Star Wars fandom since 2015.

Who are the Knights of Ren, and what caused Ben Solo’s turn to the dark side?

Charles Soule begins to answer these questions in what could be the pivotal comic book miniseries to take place in a galaxy far, far away.

The first half of the story is where readers get a formal introduction to Knights of Ren (KOR) before they met Ben Solo. For all of the assumptions that were made about this mysterious group, Soule manages to shake them up a bit.

KOR has a rather primal and primitive understanding of the force.  Their unique view on the power they wield is fascinating. Did someone teach it to them, or did they come up with it on their own?

The origin of the name Ren is revealed. Some people will like it while others will hate it. It’s rather lame; however, it ties perfectly into KOR’s philosophy.

While looking to build their ranks, the leader, whose name is also, Ren, required a steep entry fee to obtain membership. Ren’s penchant for force wielders is intriguing because he has a way of tracking and locating them, which is unknown at this time.

The story shifts gears and catches up with Ben Solo immediately after Luke Skywalker, for a fleeting moment, tried to kill him in The Last Jedi. Some major reveals change what we were told about the destruction of Luke’s temple. This new information also paints Ben in a different light, which depending on how The Rise of Skywalker turns out, could be either good or bad.

Will Sliney’s artwork does a serviceable job of conveying the proper emotions of the moment. One panel where Ben Solo went from remorseful to merciless encapsulated Ben’s constant pull towards the light.

Ultimately, this comic book will be divisive amongst fans. Some will like it, some will hate it, and others will wonder why this information was not in any of the movies.

Despite various opinions, Charles Soule gave us answers with excellent execution about one of the unknown fables of the Star Wars universe.