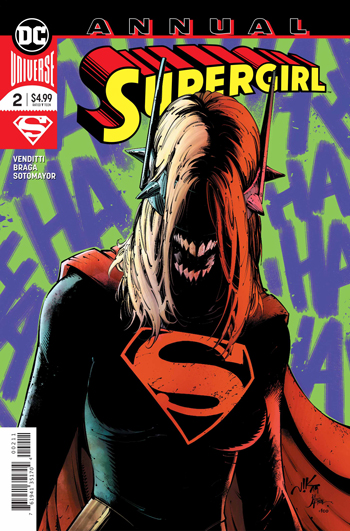 As soon as I saw that Robert Venditti was writing this issue, I was a bit excited to read this.

Venditti is a pretty solid writer and so I figured that this would up being a decent issue at the very least. I wasn’t disappointed and I felt that he had a strong take on the character of Supergirl.

The opening sequence takes place years ago on Kryptonopolis on Krypton. There is some weird Krypton sports game going on. Kara is is one of the stars of the game.

She is celebrating her victory when she sees a vision.

A dead Kryptonian is telling her that her sports career really doesn’t matter. It is because soon nobody on Krypton will be alive to appreciate it.

This is one hell of a beginning.

Then, Kara tries to go about her daily Kryptonian life. She does for the most part. But as she does, little things start showing up, out of place. In one of these scenes, Kara looks in a mirror and she sees a demented version of herself looking back.

Kara still tries to maintain her normal everyday life. But it isn’t long before the earthquakes start happening.  She starts seeing more visions. It looks like we are on the direct path to Krypton blowing up. But Venditti makes the script tight and quite exciting.

We get to see more of Kara’s life on Krypton. We get to see her change her cousin Kal-El’s baby diapers. We get to see Kara fall in love and experience heartbreak. This all happens while Krypton looks poised to explode. It is a wonderful story and it is infused with a melancholy feeling. And it is good.

The art by Laura Braga is pretty fantastic and works perfectly with the script. There is a dark twist at the end that I wasn’t expecting and that I was lukewarm on. It feels a little forced. That being said it is mostly a very good issue. It was wonderful right up until the ending.