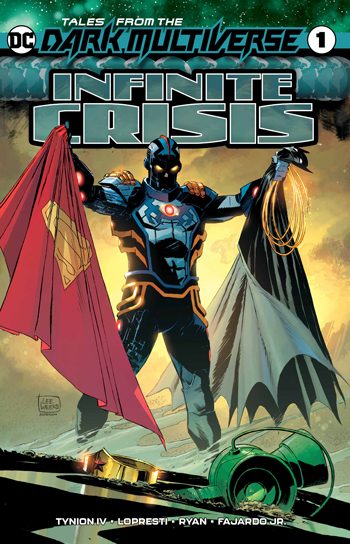 The “Tales From The Dark Multiverse” one-shots have been fun and fresh takes on classic DC stories. Some have been a bit better than others but for the most part they have been pretty enjoyable. That being said, this was probably one of the weaker ones from this series. It just didn’t grab me the way it could have.

This book takes place at the moment Ted Kord died in the Infinite Crisis storyline. Instead of Maxwell Lord killing the Blue Beetle, Ted fights back and overpowers Lord. Ted is then grabs the rifle and shoots Maxwell Lord in the head.

This is the catalyst for the rest of the issue.

This new event sends the DC heroes into a spin. Booster Gold flips out on Batman and some other Justice League members. He tells them whatever happens to Ted is on all of their heads. It feels like the tension should be pretty high at this point.

Ted and his decisions are starting to affect the rest of the universe. Ted and Booster Gold have a conversation. Booster Gold tries to get Ted under control. Ted does go to try to kill Lex Luthor. Needless to say, it doesn’t go so well.

By the end of the issue, a lot of people lose their lives. But it is really not at all interesting. The ending barely registered for me. Honestly, the issue got more and more dull with each passing page.

James Tynion IV writes a boring script that is very heavy with words. It was a trudge to get through. Aaron Lopresti has always been one of my least favorite artists too. All in all, this book is hard to like. And that is the biggest shame of all.