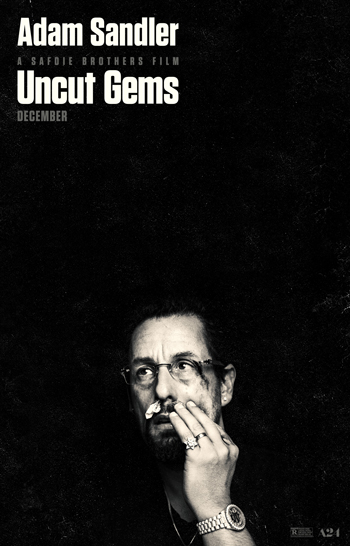 Adam Sandler is an inherently likable individual. It’s just one of those facts that has contributed to his significant box office success as the schlub to root for in any situation.

Howard Ratner, however, is the type of despicable and irritating con man who only a mother could love.

Maybe not even her. But the combination of Sandler at the top of a game I didn’t even know he had and the excellent direction of the Safdie Brothers makes Uncut Gems one of the most memorable films you’ll see this holiday season, if not this year.

A compulsive gambler by nature and jewelry store owner by trade, Howard is constantly looking for the next big score. Through a combination of luck and legwork, he happens upon a chance in a lifetime to make good on his many debts. But the shell game he creates to keep collateral in play threatens to endanger every aspect of his life.

There is barely an instant in this movie that we are allowed the feeling of being on solid ground. Each successful deal is shadowed by one that has gone wrong or has a bigger loss. Howard never seems able to catch a break, but you almost don’t want him to.

It’s riveting to have a film focus on someone so unlikable, yet charismatic. The tension is high throughout the story because just as much as you want him to get his comeuppance, you are also deeply drawn to caring about what happens in the fragile world he has created. It’s a sneering kind of pity that makes for an uncomfortably engaging experience.

It is easier to root for Idina Menzel as Dinah, his sharp and long-suffering wife who is sick of even looking at him, or his children who hold varying degrees of lack of respect for their father. Business associate Demany, played by Lakeith Stanfield, is constantly disrespected by Howard but dishes it out just as coldly. He knows his worth, and brings in the customers that spend enough to keep everything moving. One of these heavy hitters is Celtics legend Kevin Garnett, who plays himself in a surprisingly excellent performance. Many times when you have a celebrity on as a cameo or bit piece it can feel forced or wooden, but Garnett owns his significant screen time.

All of this negative energy may make for a stressful and exhausting film if not for the Safdie’s amazing editing and scoring talents. There is a sense of movement in almost everything, so the few moments of peace and stillness starkly contrasts the breakneck speed at which everything is falling down around him. The trippy synth soundtrack and lighting choices make each of Howard’s worlds vibrant and distinct. The harsh fluorescent kitchen overheads in the family home give way to the bright and welcoming neons of downtown, or the crisp and honest light of day as he hurries from deal to deal. Each setting has its own pitfalls, comforts, and dangers for Howard, but they all converge in a spectacularly unsettling ending.

They say now is the time for family and friends, for sweet tidings and kind wishes and goodwill towards men. But if you would like to be reminded of the grimy, seedy, nature of reality that lurks around the corner, I strongly suggest this movie to either close out your year or start the new one.