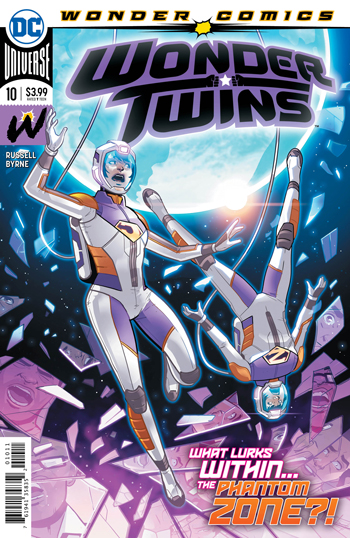 This has been a great and quirky little book. Mark Russell continues his streak of hits with this comic. He has created another likable and funny book with this comic. He writes Jayna and Zan so well and it is always a fun and enjoyable read. This issue is pretty damn good as well.

The opening of this issue takes place in a newsroom. Two people do the news. They after all of that, Zan appears out of thin air. They apparently go and steal a Kryptonite Disruptor. Eventually, with the help of Polly Math, they make their escape from this facility.

We then get to see Lex Luthor in space concocting some sort of plan. It is a funny scene that has some great bits of dialogue. But then the Wonder Twins surprise him and capture him. It is a really nice twist when that happens.

From there, we get a look at the two new villainous clowns introduced last issue. They activate some sort of intelligent device that is sure to cause some havoc.

This leads to the Wonder Twins running afoul of the Phantom Zone. Eventually, they make their way out and head towards earth. It is looking like things are headed toward their conclusion.

The ending is just a set up for the next few issues. But it is fitting. Stephen Byrne really is an amazing artist and does  great here. This is a another fine issue in a fantastic series.