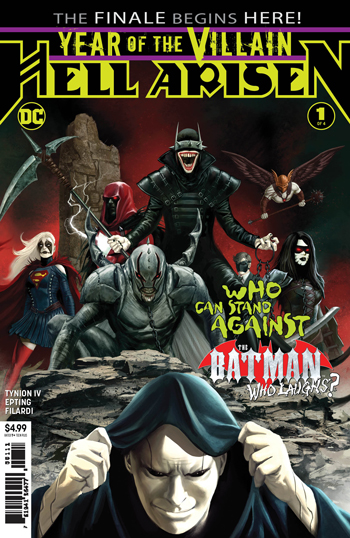 This is the book that starts to wrap up the Year Of The Villain storyline.

That is right! The only one who can possibly save the universe is one of it’s biggest villains.

The book starts off by going back in time a year. Lex and the Batman Who Laughs are having a meeting. It is a pretty insane scene. They both talk and try to benefit from the meeting.

Then the Batman Who Laughs basically challenges Lex to a duel. “Who will win?” he asks Lex. He almost taunts Lex into a confrontation.

A year passes. We are now in the present day. But we are on Earth-3. We get to see Lex trying to stoke the fire and build a sort of army of followers. He brings all of his new playmates to go meet Perpetua and join them in their quest. Lex then heads on over to Metropolis.

We then get to see the Batman Who Laughs regrouping. He is planning something pretty big and it is now time to strike. He decides that it is time to go as big as he can.

The Batman Who Laughs sends his Infected troops to go kill Luthor. They go and find Luthor and are ready to strike. Unfortunately, that is where Tynion decides fo end the issue. It just had started to get going and then it ended.

I am not the biggest fan of Tynion. He just takes forever to tell a story. But I am a huge fan of Epting. He is great and does magnificent work here. It is not a bad book overall. I am glad they put some setup in the story. Now it is definitely time to give us some action.