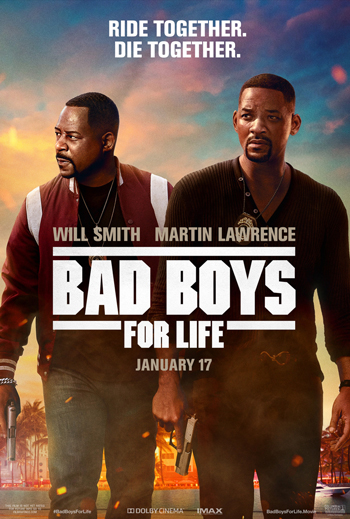 Well if you are Will Smith and Martin Lawrence and it happens to be 25 years after your breakout action film, you reflect on who you are and how you got there and more importantly, where do you go from here?

Bad Boys For Life is surprisingly reflective and pensive. Well, as reflective and pensive as one can get as cars roar, bullets fly by one’s head, and explosions erupt around you. As Detectives Lowery and Burnett face the end of their first quarter century on the Miami police force do they still have what it takes to be bad boys for life?

Their friendship and their partnership will be put to the test in a big way as the two face challenges in their work as well as in their personal lives.

In the films chaotic opening, the partners are racing through the streets of Miami on some sort of police chase, as Marcus’ bitches and complains about Mike’s reckless driving, while police cars in pursuit and helicopters zoom past buildings.

A near collision with a bus abruptly ends the action as the two get out of the car at a hospital. What happens next, I will not say as to not spoil the story, but know that it will change the dynamic of their relationship and be the focus of the story for a good chunk of the run time. Meanwhile, in one of the best scenes shot in the film, a riot erupts in a prison as the main villain makes their escape. Someone from Lowery’s past will shape his future and irrevocably change his life forever.

This, the third Bad Boys film and the first to not feature the intrepid Michael Bay at the helm, (though he does have a cameo that made me and a fellow reviewer bust out laughing in all but silent theater). It is wholly adequate and a real fun time but I definitely felt the absence of the Maestro of Mayhem…. Or should I say, Bayhem?

This time it is Belgian filmmakers and relative newcomers Adil El Arbi and Bilall Fallah who are at the helm of a script that was originally written by Joe Carnahan. Carnahan was originally supposed to direct but dropped out due to production delays. What we end up with is an action packed movie filled to the brim with the requisite carnage, fast paced car chases, mad house gunfights, spinning low angle cameras, and decrepit Miami billboard shot low as a plane flies overhead. El Arbi and Fallah have done their homework and know how to emulate their predecessor visually.

Where they falter is in his flawless pacing, editing and camera coverage. At times the action seems clunky and fractured not quite as fluid and polished as in the earlier films. For all his faults, Michael Bay has perfected the action sequence and made it real pretty and a marvel to watch. I point to the opening 15 mins of his recent film on Netflix, 6 Underground. If anyone knows how to choreograph a mind boggling action sequence it is Bay.

But I digress. Bad Boys For Life is well worth the price of admission to a theater to see the spectacle they have concocted for us all. It may not fully live up to Bad Boys II, what with the throwing of cars and boats on the MacArthur Causeway at Mike and Marcus or the final insane infiltration into Cuba, but it does its job and entertained the hell out of me.

I could have done with a little less with the Lethal Weapon 4 “We’re gettin’ too old for this shit”, midlife crisis crap and the Gemini Man-esque thread woven throughout but on the whole I think that Bad Boys For Life will find a well earned place on PC Danny Butterman’s Blu-ray shelf next to Bad Boys II and Point Break.

And that is good enough for me.

I look forward to the return of Michael Bay for Bad Boys 4eva sometime around 2055 or so if you go by the length between each sequel which is 8 years for Bad Boys II and 17 years for Bad Boys For Life. Maybe Bay can do an Irishman type film with Smith and Lawrence where they reflect over the past 35 years of their friendship. With all the new de-aging technology, the possibilities are endless.