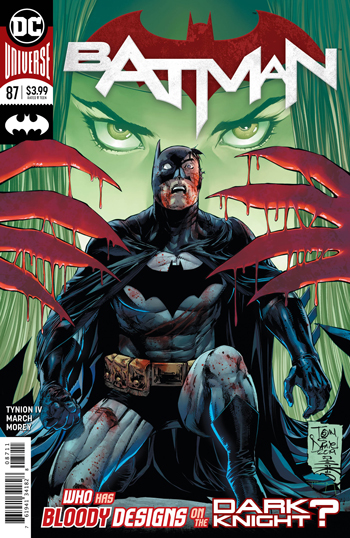 The second issue in Tynion’s run on this title is some pretty standard fare.

That’s not to say that it is terrible. It’s not. But it isn’t that great either. There just isn’t a lot in this book that makes me feel confident in his writing. I actually feel that we have seen this story done better before elsewhere.

And that is a damn shame.

The opening scene has the Penguin having a discussion with the Riddler. There are a ton of bodies on the floor where they are talking. The Penguin is basically telling the Riddler to close up shop and to use one of his aliases to get away.

Something big is coming to Gotham City and the Penguin is getting ready.

Apparently, there is a villain named The Designer who is coming to the city. Edward Nygma is still puzzled why Deathstroke is trying to kill him. Meanwhile, there are more assassins coming into the city. There is a slow boil happening.

But sadly, it feels like it should be more interesting than it actually is.

We get to see a bunch of assassins including Deathstroke being captured by the Gotham City Police. We also see Batman and Catwoman doing some investigating. There was a bond between them previously that is really missing in Tynion’s writing. It now feels stilted to me and uncomfortable.

The rest of the issue is just Batman visiting the captured villains, those villains getting free, and a really crazy last panel. Oh well, at least the art by March is good and reminded me of Norm Breyfogle’s art.  It helps the reader get through a story that is basically pretty dull.