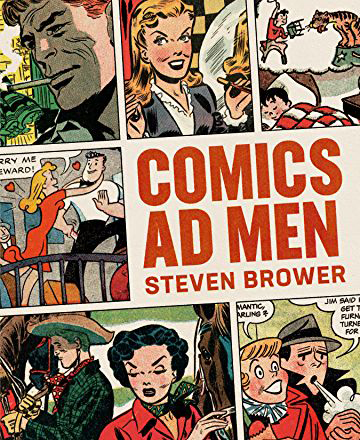 Quick! What does Green Lantern have in common with the Pillsbury Doughboy? Turns out they were both co-created by artist Mart Nodell!

That’s just one of the interesting factoids and revelations one can find in Steven Brower’s book, Comics Ad Men, published by Fantagraphics.

As a kid in the ‘60s, I always loved it when I’d spot a comic book artist’s familiar style in a newspaper or magazine ad or, even better, an ad that was made to look like an actual color Sunday strip. Well, it turns out the latter used to happen a lot more often and this book presents many glorious examples.

If you read various histories of comic books, you’ll always find where it mentions this artist or that artist who left comics and went into advertising or commercial art. They then exited those books. Comics Ad Men is the book that follows them where they went after that.

Mainly an art book, we start with Brower’s interesting and informative text.

Although it sadly could have used a good proofreading, it does present a straightforward narrative of the major players in the field before heading directly to about 100 pages of color and black and white examples of long buried comics history footnotes.

There are ads for soap, cereal, and cigarettes as well as ads for batteries, soft drinks, Hostess Twinkies, and even ads for the ad agencies themselves.

The art is provided by familiar comics folks such as Neal Adams, Wallace Wood, Lou Fine, Frank Robbins, Dik Browne, and C.C. Beck. My personal favorite section of the book has two of the many beautifully drawn Camel cigarette “Sunday strip” ads by Bob Bugg featuring Phil Silvers’ Sgt. Bilko character. There were so many of these back in the late 1950s that one could be forgiven for presuming it was just a regular Sunday strip. When the ad campaign ended, I’m sure some readers actually complained about the Bilko strip being canceled!

Outside of the opening text, there are captions for most of the pages throughout that give at least some basic info on what you’re seeing. As I said, it’s really an art book, not a history book. If you’re a Madmen fan, or just a fan of comics-related advertising, you’ll enjoy this volume and likely be thinking—as am I—that there’s room here for multiple volumes of this fascinating stuff.