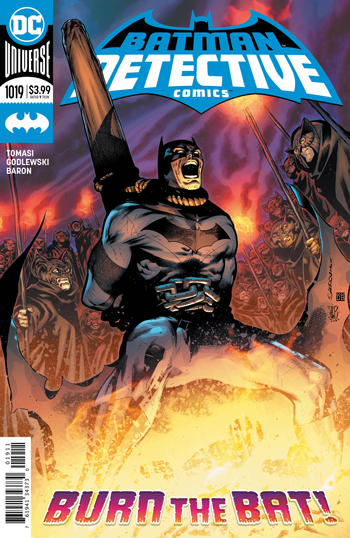 This latest storyline over in Detective Comics has been pretty great. Peter J. Tomasi knows how to pen a good mystery and he is really strutting his stuff in this latest story. I am truly loving what he is doing and I look forward to what he brings to the table.

The opening pages has the axe wielding cult leader from the 1600’s starting an attack!

Bruce Wayne and Lucius Fox are there and they decide fight back! It is a rousing opening scene that made me sit on the edge of my seat.

Eventually, they overpower the cult leader. Bruce then decides to investigate it’s past and see where it came from.

But of course, the cult leader escapes the clutches of the police. Bruce then puts his Batman costume on and goes out into the night.

Batman goes to the Gotham Botanical Garden to investigate. He gets more than he bargains for when he shows up. The cult leader is there with his acolytes. That is when things get extremely crazy when we see what the cult has summoned.

The ending is a little too quick and pat. There was a lot of buildup with not a lot of payoff. The art was nice but not as good as what we are used to on this title. It is still a decent comic right up to the end though. And while it feels like a filler story, it is still a nice enough time until the next issue.