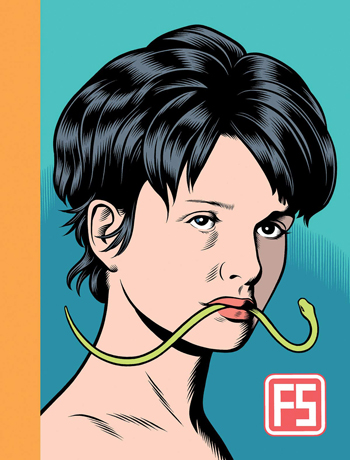 By Charles Burns
Published by Fantatgraphics

Nobody ever said art had to be pretty. Some of the best art ever produced is actually rather disturbing.

Charles Burns is an artist whose work has disturbed me ever since I first saw it maybe 20 years or more ago. Fantagraphics’ new collection of the artist’s work, Free S**t, continues that tradition as parts of it are indeed very disturbing.

If, however, one can learn a lot about an artist when their uncensored work is collected, then Free S**t tells us a lot about Burns from its inclusion of sometimes NON-disturbing art.

I had no idea what this collection was all about until the artist himself explains it right at the end. Apparently, Charles Burns has, for quite some time now, been privately publishing and giving away at conventions little 8-page mini-zines consisting of…well, whatever happened to be floating around in his disturbed little head at any given time. Free S**t he calls it, and technically that’s the name of this collected edition of the first 25 issues as well.

You’ll find a number of thickly inked or scratchingly penciled creatures that seem to have crawled up from the deepest pits of hell, some nightmarish imagery so far out of any context that you really don’t want to know what it’s all about, but also some cartoons, some art studies, some Jack Kirby and Wally Wood homages, and all manner of stream of consciousness ephemera. It’s as if you were invited to spend some time directly in someone’s id bouncing around in there from unhinged trauma to some surprising symbols of hope.

If you aren’t already a fan of the artist, you aren’t likely to become one from the completely random slices of his head found in Free S**t. If, however, you are one of his many fans, then Free S**t will likely be both a revelation of sorts and a must-have addition to your personal library.