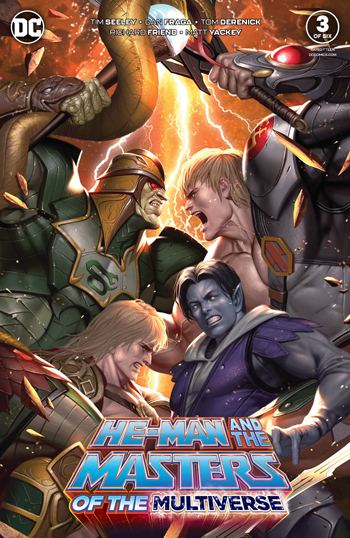 Filmation’s He-Man and the Masters of the Universe was the perfect soup for the childhood soul.

Cartoon Network’s incarnation of the series grew up with us impeccably by expanding upon the lore and mythology.

I’ve been anxiously waiting for Tim Seeley to bring this story to 2002 and I’m happy to report, we have finally arrived, and oh my, things have changed.

Hordak rules Eternia with an iron fist, Skeletor has locked himself away in Castle Grayskull, and the Masters are MIA.

Hordak’s inclusion is a subtle inside baseball nod to what was planned initially. According to Mattel’s Ian Richter at the time, Hordak was scheduled to be the main villain of season three; however, the show was canceled after the second season.

Seeley used Hordak well in small doses by exhibiting his wisdom, such as electing not to attack Anti Eternia He-Man. King Hiss, on the other hand, didn’t exercise caution, and Hordak knew the result before it happened.

Teela made her first tangible appearance, and it was heartfelt as she served as a reminder of what movie and trapper He-Man missed out on in their world. Seeley effortlessly injected several different levels of emotion throughout the book without the story feeling jumbled.

There is new information revealed about Prince Adam’s connection to He-Man and how it differs on each version of Eternia. Ever wonder why the prince never appeared or wasn’t even mentioned in the 1987 film?

Now, we have our answer.

The dynamic between Skeletor and Keldor is highly engaging due to the idea that Keldor will eventually turn evil. On the surface, it’s not too farfetched. However, Keldor is the only good version of Skeletor in existence, which should mean the odds are in his favor.

Seeley cast doubt, however, which added depth to his journey.

It’s tough to have different art styles work in tandem on the printed page. Once again, Dan Fraga and Richard Friend pulled this off in beautiful fashion. Particularly, when a character is killed, their touching farewell shouldn’t have worked from a visual perspective. However, it does, which points to the strength of the book’s presentation as a whole.

He-Man and the Masters of the Multiverse #3 continues this series’ trajectory of being the ultimate MOTU crossover. Tim Seeley and company provide fans with what they want, what they need, and things we didn’t even know were possible. The moments here are highly satisfying while keeping up the excitement for what comes next.