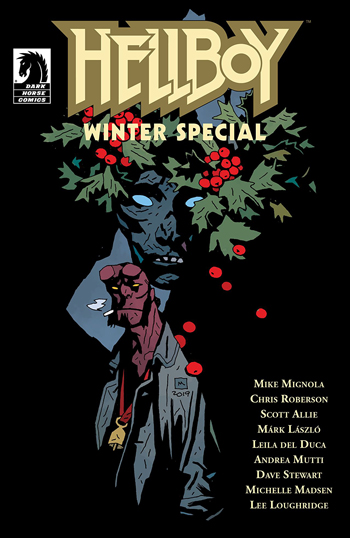 It is always a little bit of a gift when a new Hellboy comic book comes out.

There is just a certain quality that you come to expect from Mike Mignola and company. This book carries on the tradition by having three excellent stories by some really awesome creators.

The first story is The Miser’s Gift which is written by Mignola and drawn by Mark Laszlo.

In this story, Hellboy faces off against a miser in named Tobok.

The story starts off in Budapest in 1989.

Hellboy is at a bar. He hears a story about the miser. After the story, Hellboy goes and checks out where the miser might be.

This was a fun little story.

I will say I enjoyed the artwork by Laszlo the best of all three stories. It is a lot more bright than previous Hellboy artists but has great detail. The story wraps up nicely and it is a great little take with a few scares and some laughs.

The next story by Chris Roberson and Leila Del Duca is pretty fun as well.

It features a bunch of people in New York facing off again against a creature called the Boogam. It is entertaining but the lack of Hellboy being in this story made me a little disappointed. Sure we got the Sarah Jewell character but it wasn’t the same.

The last story by Scott Allie and Andrea Mutti is especially well drawn. But the story about the wrath of St. Hagan is boring and doesn’t add up to much.

And again, no Hellboy.

All in all, the first story is the best. The second story was decent and the last wasn’t my favorite. It is still a decent enough entry into this universe and I liked this comic. The first story, again, is the best reason for reading this.