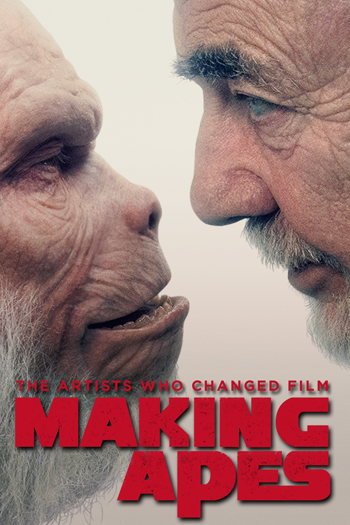 Disappointing but still worthwhile documentary on the extraordinary makeup artists – led by John Chambers and Tom Burman – who created the revolutionary designs and practical applications for the apes in the original Planet of The Apes film.

The doc begins with an entertaining and concise overview of the history of makeup in film.

For cineastes, the overview involves the usual suspects, including Lon Chaney and Jack Pierce.

Once we settle into the history/making-of POTA, the film relates some apocryphal tales and (to me, at least) some new details.

This is fun stuff – there’s a great anecdote involving Charlton Heston running a long way to obtain straws for his “simian” co-stars to be able to “eat” their lunch through their restrictive masks.

We also begin to get a sense of the atmosphere on set – especially amongst the makeup artists.

The gruff Chambers is suitably impressed with the young Burman and hires him to work on the film.

There are further on-set stories and on-camera recollections…and then the film takes a turn.

It’s similar to (but not nearly disastrous as) the turn that Back in Time – the dreadful documentary on the Back to The Future films – takes around the midway point.

Back in Time suddenly – and inexplicably – becomes a long, dull commercial for DeLorean cars.

In the case of Making Apes, the film becomes a bit of a vanity project for Tom Burman and his wife, Bari Dreiband-Burman.

To be fair and clear, they both come across as likable people.

And I’ve been a fan of Tom Burman since seeing his work on the Cat People remake in the theater as a young teenager in 1982.

But dispiritingly, the way the film is handled at this point, with dull reminiscences, syrupy music, and, frankly, self-serving interviews, really sucked the air out of the room.

There is enough of interest here to very mildly recommend the film with huge caveats.

But it should have been so much better.