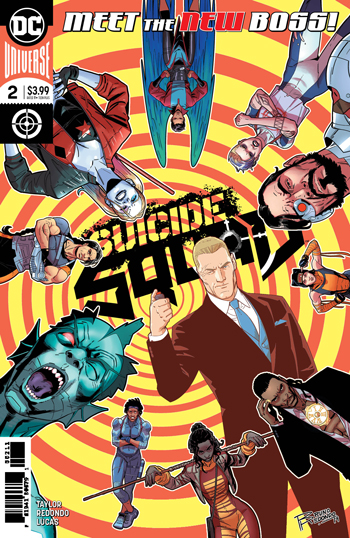 The first issue of this new series showed a lot of promise.

But any first issue can be good. It takes follow through to make a series memorable. And judging by this issue it looks like the creative team seems to be doing just that.

This is a really good second issue.

After the events of last issue, the Suicide Squad regroups.

We get a scene where Taylor gives this crew some nice characterizations. While this is going on, the tension feels really high. And that is when the action starts to happen.

There is an attack onto the boat from some undersea villains. It is fast and exciting and gets the story really going at the point. Tom Taylor really brings his A game here and I was completely hooked right from this point on.

Honestly, there was a lot of action that erupts.But the action here is never at the expense of character. And this book has plenty of them and they all have intriguing personalities. Taylor juggles them all extremely well and his efforts pay off in spades.

The second half of the issue is cool as well, as Deadshot takes the lead. He takes the team and tries to get them out of the crazy situation that they are in. By the end of the issue, we really get to see what he is capable of. It is pretty awesome.