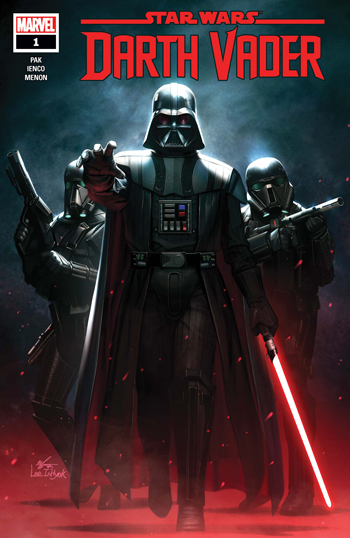 Imagine picking a fight with the way wrong person on their worst day ever?

Greg Pak examines the tragedy of Darth Vader as his rage-filled vendetta conjures sins of the past.  When people think of the emotional fallout of The Empire Strikes Back, the horror-filled reveal of Luke Skywalker’s parentage immediately comes to mind.

But what about Vader?

Does anyone think about what he went through?

Luke’s refusal to join Vader sent the Dark Lord into a tailspin.

It’s something he can’t fathom and comes to a startling conclusion that means trouble for anyone in his path.

It’s this realization that Pak firmly establishes as the crux of the series.

Normally, Vader will do his master’s bidding at the drop of a hat. Things have changed as his quest for vengeance and discovery had consumed him, which is evident when Vader blatantly ignored a command to make contact with The Emperor.

He would never have done that before Luke’s refusal to join him. It will be interesting to see how far this new dynamic will go before either Vader pumps the breaks, and Palpatine plays his hand. Raffaele Ienco’s page layout’s augment the narrative with perfectly timed flashback sequences to the previous films that fuel Vader’s anger in the present.

A visit to the Lars homestead triggers the memory of Anakin Skywalker’s conversation with Padme in the same room in Episode II. If these memories weren’t enough to rile Vader up, he’s accompanied by a forensics droid named Zed Six Seven. While Vader didn’t get to kill his desired target, Zed instigates the situation by telling Vader that he can at least kill someone; hence the aforementioned people who picked the wrong fight at the wrong time.

Now, Darth Vader is on a new path to find the secret of Luke’s origin. In this first installment, Greg Pak laid the groundwork for a story arc that is the most intriguing yet by making it Vader’s most challenging mission.