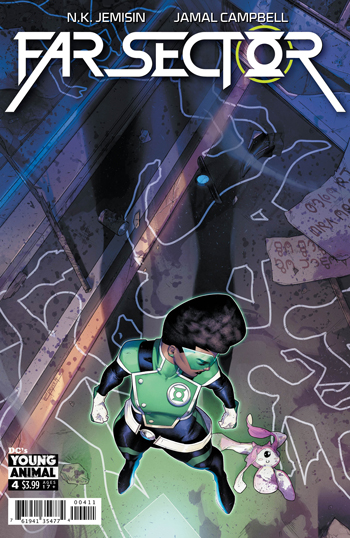 DC’s newest Green Lantern, Earth-girl Jo Mullein, has been posted at the farthest reaches of the known universe, in the vast interplanetary system known as the City Enduring, to keep the peace.

Hard to do when a sizable portion of the population takes to the streets to demand change, and the City’s Peace Division shock troops have orders to shoot to kill, to stop it.

The reason for all the turmoil? The citizens of City Enduring have begun to realize that the Emotion Exploit wired into their DNA to tamp down they’re emotions, has robbed them of a part of themselves that they want back.

Even if they have to risk addiction to a designer drug to switch it off.

Even if that leads to a sharp spike in violent activity, unseen in the City for generations.

Author N.K. Jemisin has created a fine line for herself to walk in telling this story. A culture that has developed without the benefit of emotional awareness is a hard thing to depict when so much of our own experience is rooted in our emotions.

That’s especially true when the building conflict you’re trying to explain, and the characters involved, all seem to have emotional motivations – and, frankly, emotional understanding – that simply shouldn’t be there.

Possibly an unavoidable challenge without more room to work the premise, but it’s one that muddies the storytelling, which is unfortunate because it continues to be distracting, even as Jemisin goes to pains to position Jo as an arbiter of peace, with the force of not just her Green Lantern ring but her own emotional righteousness at hand.

Presumably this is all leading to a cultural crisis beyond the scope of a single protest movement. For now Jo is busy trying to get a handle on the situation – and all the players involved – through a judicial use of force, diplomacy… and attitude. Not to mention, heart.

Too bad her ring only has so much force to provide, apparently. Which raises questions of its own. Of course, we’ve known from the beginning that there is a mystery at the heart of Lantern Jo’s ring. And her deployment.

Hopefully we’ll start getting answers soon, because all this issue gives us – besides the cut of Jo’s gib – are clues that continue to raise more questions than they answer.

No question that artist Jamal Campbell’s work is still amongst the best out there. And no question that Jemisin is bringing her considerable storytelling prowess to tell a tale of political intrigue that is both subtle and socially woke.

Long as she hasn’t gotten too clever for her own good. Me, I’m holding out for a revolution.

One with a little willpower in the mix.