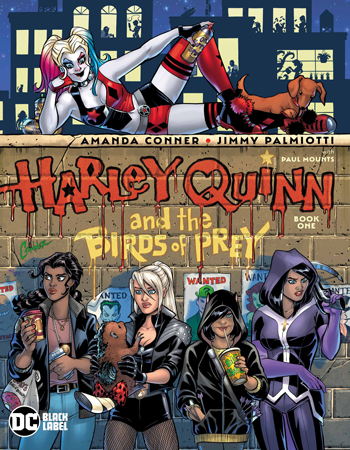 A hilarious new animated series on the DC Universe app. (No seriously, go watch it.) A movie that has had great reviews. And now the return of Amanda Conner and Jimmy Palmiotti via DC’s Black Label.

They bring us a Harley who has hit a rough patch, mostly of her own making.

To get back on track, Harley’s going to create havoc.

This first issue finds Harley dreaming of better days with Poison Ivy. This initial sequence does show my least favorite character since Harley Quinn spun off on her own. Red Tool.

Red Tool, he’s like Deadpool but he’s a tool. Get it! It’s that joke your friend keeps repeating because you smiled once.

Things do take off from there though.

We see how Harley’s impetuousness leads to the (probably temporary) demise of her relationship with Poison Ivy, destruction of her home, and her friend Tony in the hospital. Lest you think this is “Harley’s Bad Day”, that’s not what Conner and Palmiotti would deliver.

Harley Quinn, gets the idea to return to Gotham. But before she leaves we are treated to mob war that manages to be hyper violent and hilarious.

One of the advantages of DC’s Black Label is the space given to creators and we see it to full effect in this first issue. After our mob war, Harley takes a train trip! A train trip packed with comedy and action that in a standard monthly would be it’s own issue. If you ever watched a suspenseful train movie (Strangers On A Train, Taking Of Pelham 1-2-3) and wondered if it needed more colorful chaos, well here you go!

And it’s here we meet Huntress, Cassandra Cain, and Renee Montoya. This first issue does not give us a lot of time with the Birds of Prey, but it does enough to perk the readers interest.

This first issue was really solid. As always, you can read the affection that Conner and Palmiotti have for Harley Quinn, Poison Ivy, her Coney Island gang, and even Huntress and Montoya. They recognize that Harley’s not just a deliverer of chaos, but a character who loves her friends and wants to do the right thing through her own moral system.

The dialogue flows with whip smart banter. The art is clean and colorful without seeming exploitative. This book really carries plenty of bang for your buck.

But, next time, leave Red Tool in the DC dust bin.