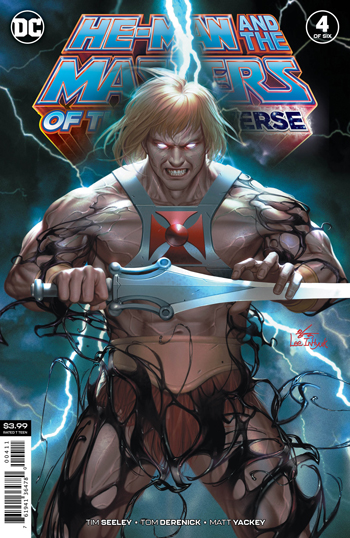 Anti He-Man has killed almost every version of He-Man he’s encountered. Now, he’s about to battle the quintessential version most people grew up with after school and on Saturday mornings. Such a clash seems like a monumental battle.

However, Seeley squashed those hopes with a stark reminder while making the interactions with the Filmation universe even more intriguing.

Keldor and movie He-Man overheard Filmation He-Man, giving several life lessons to Orko, which is how every episode of the cartoon ended. These pearls of wisdom reveal an unexpected truth.

The Filmation universe has never experienced war and bloodshed on the level of the other incarnations of MOTU. Words such as “murder” and “kill” are never uttered in this vibrant version of Eternia. After some thought, it becomes evident that the He-Man of our childhood wouldn’t stand a chance against the antagonist.

Does this revelation ask what purpose does Filmation serve in the story now? Seeley cleverly answers this question in some fascinating ways. For instance, Seeley inadvertently took a page from the booking of professional wrestling matches. Wrestling icons Bruno Sammartino and Andre The Giant never wrestled each other because one beating the other would damage the losers drawing power at the box office. In the case of this comic book, He-Man and Anti He-Man do not fight. Not only would the fight be a narrative mismatch, but the likely outcome would require a violent finish, which is a stark contrast to what the fun-loving version of MOTU represents.

So, Prince Adam takes the lead here. I know, it sounds like a letdown. However, it’s the exact opposite. What started as an accident turned into a blessing in disguise. Adam displayed utter bravery in the face of total annihilation. Meanwhile, Filmation Skeletor, who also wouldn’t stand a chance in a straight-up fight against Anti He-Man, found a way to do so using the legendary Star Seed.

Dan Fraga and Richard Friend have done a phenomenal job of combining the various art styles of each universe throughout this series. They outdid themselves here. The cartoon illustrations work in tandem with the more serious depictions. It shouldn’t work but does and with excellent results that include bombastic fight scenes along with tension-filled moments.

Tim Seeley might not have given fans what they wanted, but he gave them something so much better. The Filmation universe is served exceptionally well here as the sometimes-ridiculed cheeriness, and do-gooder nature of the show pays dividends. The book’s final image speaks volumes regarding Keldor’s fate as the multiverse hangs in the balance.