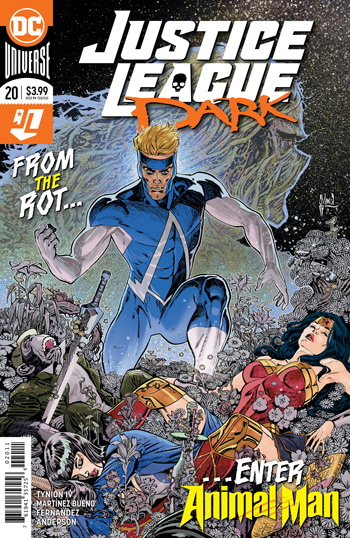 “It’s the Parliaments Diana. They’re all at war. We have to find the other Guardians.”

The magical world is in disarray.

The new rules of Magic have yet to be written.

And the elemental Parliaments of Life are… freaking out.

That’s the premise of this month’s Justice League Dark, the first of a three-part arc which has promised us the return of Swamp Thing, (or whatever’s left of him), even though there’s no sign of him at all in this issue.

Because the Parliaments operate in the realms of Magic, the potential for chaos is extreme, as we discover in our opening segment, in which the Parliament of the Grey makes a bid for dominance in Los Angeles with a very weird and very dangerous outbreak of magical fungus spores.

Good thing Buddy Baker’s on hand to help stem the tide and… call in re-enforcements.

Mind you, Animal Man is a Guardian of the Red, so there’s no telling how helpful he’s going to really be if this all gets out of hand. And judging by the way things go in this issue, that’s a real possibility, despite the combined efforts of the JL Dark and the ancient knowledge of a certain Lord of Order.

It’s a race against time, and even with the Floronic Man trapped in an arcane circle within the Hall of Justice, there’s a number of other Parliament Guardians that remain unaccounted for.

Like Abigail Arcane, current avatar of the Rot, and… possibly other members of her family.

Series author James Tynion is stepping down from regular duties to take on Batman full time, and this issue looks like it will serve as a bridge for new frontrunner Ram V. to take over the scripting next issue with (if previews are to be believed) regular series artist Alvaro Martinez Bueno.

Not at all inappropriate for a Swamp Thing story, of course.

Doesn’t mean I won’t be happy to see Martinez Bueno back here next month.

Along with whatever weirdness will come with the reclamation of Swamp Thing. Maybe we’ll find out where he’s been, next issue.

Hey, for that matter, in his current state of decomposing sludge, maybe a reunion with his one true love is no longer so very unlikely…

Next Issue: I’ll melt with you.