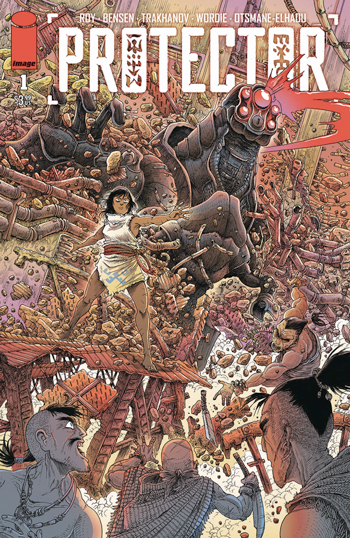 This is another one of those books where the world has ended and there are a band of survivors. These survivors are trying to make their way in this terrible new planet Earth.

Trust me, as soon as I heard the premise, I was looking for the nearest exit. We have seen this premise a thousand times by this point.

So, I went into the book feeling like it was going to be another repeat of another comic. But I was wrong.

This was certainly a lot better than I expected.

Oh sure, the post-apocalyptic setting was in place.

The book takes place in the year 3421. Climate change has ravaged the earth. There are a group of survivors who have become tribal because of this. All of the technological advances that the world had are now gone and society has become, well, simple.

Oh course, this does not last long.

There is a young high priestess who isn’t thrilled with the way things are being run. The priestess is walking along at the beginning of the issue. Two enemy soldiers spot her.

There is a chase of sorts. The priestess falls into a cavern. Things aren’t looking too good for her.

The priestess seems to be cornered. At the last moment, a robot like creature emerges and is ready to fight for the priestess. It is an exciting way to begin a comic book series.

From there, we get to see that there are two tribes of people in the center of the book.

We get to see that the Hudsoni are the primary tribe. There is also an opposing tribe called the Devas. We get to learn about the different tribes.

We also learn that there is an demon in the city of Shikka-Go. The Hudsoni war chief named First Knife goes to take care of it personally. It is pretty cool and kind of exciting.

I did have to reread this three times to figure out what was going on. It was a little hard to get into. Once I understood it, I liked it. The art is the best part. Artyom Trakhanov is a star who is going to be a break-out talent.

All in all, it’s a pretty decent book that is very different from your run of the mill post apocalyptic story.