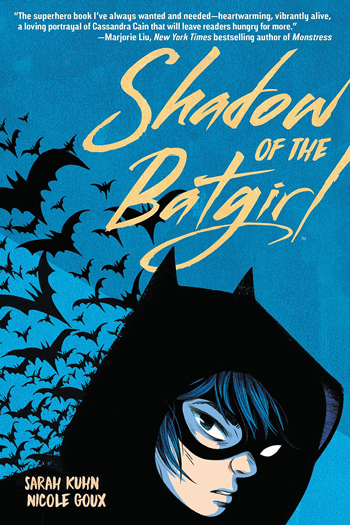 The DC Ink books have been a lot better than I ever thought they would be. They really break down some of these age old heroes and put a nice shine on them.

The focus this time is the Cassandra Cain character.

And it might actually be the best book to come from the line thus far. Heck, it might even be one of the best graphic novels to come out this year.

At the beginning of the story, we get introduced to this version of Cassandra Cain. Kuhn and Goux do a great job with this. There isn’t a lot of dialogue in the first chapter of the book yet it is completely involving.

We get to see Cassandra fail to kill someone she was sent after. Her father runs a criminal empire and after deciding not to kill, she runs away from her father.

She takes up residence in the Gotham Public Library and with restaurant owner Jacqueline “Jackie” Fujikawa Yoneyama.

Both settings are really cool and Goux does an incredible job designing both of these places.(the details at both locations are awesome)

Jackie is a tough cookie but Cassandra does learn from her. At the library, Cassandra listens in on a group led by Barbara Gordon. The group discusses Batgirl and her many qualities. Cassandra loves this and reads up on the Batgirl and studies her. Batgirl becomes her hero and someone she looks up to. Little does she know that Barbara was actually Batgirl at one time.

Cassandra also gets a love interest here and it is handled with care. I appreciate that it felt natural and not forced. That is a credit to the creators. All the relationships are handled wonderfully with the dialogue and the art and there are no false notes.

It isn’t long before Cassandra’s father comes back into the mix causing trouble for Cassandra and her personal identity. Cassandra questions her place in the world the entire book. By the end, she finds it. It is a fate that is entwined with Batgirl’s. It is also a fate that allows her to find her one true family. It ends beautifully. It also leaves the door open for a sequel. I hope the DC higher up green light one immediately with the same creative team.

This was great. The story is well done and never lags one bit. Kuhn is an excellent writer and I look forward fo see what she does next. And Goux is a star. I have seen her art before in F*ck Off Squad, and man, she is great. Her costume designs are really excellent as well. I felt like she has the best take on Batgirl artistically since Babs Tarr.

I look forward to seeing more work from both of these creators as well as seeing both of their stars rise in the comic book field.