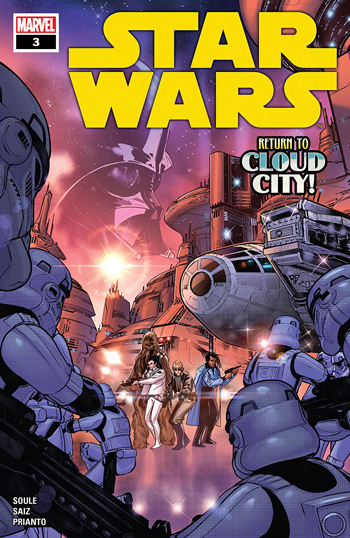 The Star Destroyer Tarkin’s Will is bearing down on a scattered Rebel Fleet, Luke, and Lando return to Cloud City and Leia gets an education in the carbonite freezing process.

Charles Soule teased a mighty big revelation in the last issue as it relates to the whereabouts of Luke Skywalker’s lightsaber.

You know, the one he lost when his hand was chopped off.

There was a hooded figure that many have speculated to be Obi-Wan Kenobi.

Here, Luke goes back to the scene of the most painful moment of his life to find his lightsaber.

Lando and Leia have their own reasons for going back to Bespin, but Luke’s quest was the driving force behind this issue.

Sadly, Soule pulls the rug from under the reader. It’s revealed we’re a lot further away from finding out what happened to the saber than we were lead to believe. The look on Luke’s face right before the reveal mirrored what many readers will feel in the moment.

Lando’s quest to save Lobot is the emotional center of the book.

The imagery of what’s become of Lobot since The Empire took over Cloud City is horrible.

Lando’s reaction and sorrow for his friend sold it. If you read the Lando mini series (2015) also penned by Soule, you will have even more appreciation for Lando and Lobot’s friendship. It’s an excellent series that I recommend going out of your way to check out.

Leia’s trip down carbonite memory lane takes an unexpected turn that many won’t see coming. It made sense for Leia to look around the freezing chamber since she needs to know how to free Han Solo when she finds him.

At this moment in time, she doesn’t trust Lando as far as she can throw him. Despite his experience with the carbon freezing process, Leia wants first hand knowledge.

The final moments of the book are set up masterfully. Soule and Saiz worked well in tandem to ensure a complete surprise born from a new standard imperial operating procedure.

In other news, Commander Zahra of the Star Destroyer Tarkin’s Will is absolutely crazy. There is one target in particular who should seriously consider going into hiding to avoid Zahra’s wrath.

The lightsaber fake out was a real letdown, however, Lando and Leia’s mission are so well realized, it practically made up for the heightened expectations going into this issue.